What a splendid innings Suresh Raina played to guide India to a comfortable victory over South Africa in their clash at St Lucia on May 2. He became only the third player in the history to score a century in Twenty20 Internationals. 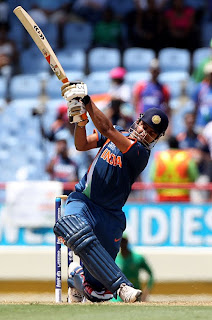 Only Chris Gayle of the West Indies and Brendon McCullum of New Zealand had accomplished this feat earlier, making Raina the first Indian to reach the landmark.

There could not have been a better occasion for Raina to cross the three-figure mark because his team was struggling to post a decent total after an uncertain start. The outfield was on the slower side and the batsmen were not getting full value for their shots.

The South African fast bowlers, backed by the acrobatic fieldsmen, were not prepared to give anything away and there was hardly a possibility of the Indian score getting past 150.

Raina and Yuvraj Singh, both left-handers, had consolidated the position with a solid third wicket stand but the total was just 112 when only five overs were left. In normal circumstances India, having suffered more wounds in the death overs than any other team, would not have thought of adding more than 35 or 40 runs

The enigmatic Raina had shown previously that he does have the talent to cut loose but probably nobody expected him to take charge in the manner he did. He led the carnage of the South African bowlers and India were able to collect as many as 75 runs in their last overs.

India had certainly leaked many more runs in the death overs against even the modest opponents but for a change they did the damage to the South Africans and the eventual total of 187 in the allotted 20 overs was far too many than anticipated.

It was the best T20I innings by an Indian with Raina on song. He appeared as cool and calm as if playing for Chennai Super Kings in the Indian Premier League (IPL). He found the boundaries at will and it was a matter of time for him to reach the coveted three-figure mark.

It was in the fitness of things that skipper Mahendra Singh Dhoni was with him at the crease when he brought up his thoroughly deserved hundred. He brought up the milestone with a six off Albie Morkel, his Chennai Super Kings teammate.

Remember that Dhoni was also in the middle when Sachin Tendulkar had completed that historic double century in the One-day Internationals earlier this season. 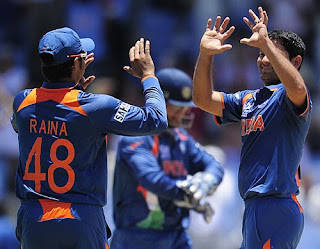 Not surprisingly Raina credited Dhoni for his accomplishment. “Mahi helped me a lot in the IPL. The senior players, Sachin Tendulkar and Rahul Dravid, have also supported me throughout. I've played five or six years of international cricket, it's important to fulfill the dreams they've had for me,” a beaming Raina acknowledged.

Raina was delighted that his knock helped India secure a much needed victory over fancied South Africa that took them to the top of points table in Group C.

The outcome was seldom in doubt with the Indian bowlers not losing control and most importantly Dhoni making the moves which caused unforced errors from the South Africans who remained well behind the clock from the beginning to the end of their chase.
readmore »»