Can Zulqarnain take such a big step all by himself?

Well Zulqarnain Haider has remained a dubious character all along but expecting him to have deserted the national team in the middle of a series looks something too big for a man of his stature. 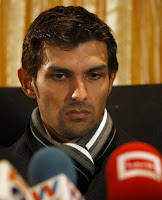 The controversial wicketkeeper-batsman was in the United Arab Emirates (UAE), having played the ‘decisive’ knock that guided Pakistan to yet another upset win over the South Africa in the fourth One-day International, stunned the cricket world by not turning up at the ground for the fifth and final ODI.

It must have been a ‘shocker’ for the entire cricketing fraternity but not the officials of the Pakistan Cricket Board (PCB) who had obviously handed over him his passport before the game.

Had that not been the case how Zulqarnain flew out of the UAE. In a country as regulated as the UAE there was not even minutest of doubt that he did have his travel documents with him when the news of him being ‘in the air’ was broken during the fifth ODI.

While everyone was speculating about his whereabouts when he was found missing as the teams reached the ground but I don’t think there was any element of surprise, by the look of things, for Ijaz Butt and his cronies.

How can Ijaz Butt be unaware of the episode when one of his lieutenants must have handed over the passport to Zulqarnain because there’s no evidence to suggest that the ‘absconding’ cricketer had stolen it? If it were so a case should have been lodged with the local police about it.

Doesn’t it look interesting that Zulqarnain did not ‘inform’ it officially to the team management or the so-called PCB about his plans to escape from the UAE? It lends credence to the theory that he had an understanding with Ijaz Butt without whose whims nobody could dare doing anything, particularly his close associates.

Zulqarnain’s preference to reveal the ‘secrets’ to the media instead of reporting to the International Cricket Council’s Anti Corruption Unit poses few questions and there’s obviously a message between the lines that everything was being according to some previously worked out plan.

Zulqarnain, having surfaced in London, didn’t come up with any satisfactory explanation in the press conference he addressed there and in fact more questions emerged that remained unanswered.

There are indications although not reported by the media in a big way yet that Ijaz Butt did have a ‘role’ in facilitating his safe passage to the United Kingdom. This is such a serious matter which could even lead to his dismissal from the position of the Chairman, PCB.

Although Ijaz Butt has caused irreparable to the Pakistan cricket over the last couple of years this could the issue that finds him out of the job he loves so dearly because of the ‘absolute power’ he wields in calling the shots.

I don’t know if the matter would continue to be probed or the concerned authorities will close the case at the behest of some ‘influential’ people in Pakistan whom he has obliged at the cost of national interest.
readmore »»