How dare Billy Bowden make such a biased decision?

Fielding and catching are not the only factors that could prevent Mahendra Singh Dhoni’s Team India from becoming the first hosts to win the Cricket World Cup. They have to overcome the outrage and bias of the umpires as well. 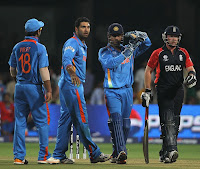 Already an umpiring decision has cost them a point which might become crucial in the later stages. The format of the event has been designed in a manner that doesn’t threaten the fancied teams as far as their qualification in the knockout games is concerned. It will be helpful in keeping the interest alive until the end of the league matches.

But the points will indeed matter in deciding the line-up for the quarter-finals from where the actual battle will commence. The team becoming the group champions will have a relatively soft opponent first-up in the knock-out games as they would be taking on the fourth placed team of the rival group.

The controversial Umpiring Decision Review System (UDRS) is making its debut in the World Cup and not surprisingly it has hurt the Indians, who have been vocal in opposing the system, more than any other team.

The standard of umpiring can never improve if the intent is on favouring a team or victamising the other. With so many television cameras placed at the cricket ground and the action getting broadcast live the umpiring blunders come to the limelight as quickly as they are made.

How can the UDRS work if the umpires are unwilling to do away with the old practices? Remember that in the years gone by the umpiring in some of the countries, particularly Australia, New Zealand and the West Indies, was so horrible that the visiting teams hardly every managed to conquer the hosts.

It went to the credit of the administrators of Pakistan, most notably Air Marshal Nur Khan and Arif Ali Khan Abbasi, who pioneered the idea of neutral umpires to save the future of the game. Cricket has obviously become a better game with the induction of neutral or third country umpires and the home teams are no more invincible. 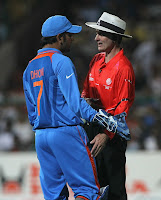 But there are a few black sheep around who are bent upon bringing the game to disrepute with their wrongdoings. It cannot be mere coincidence that the majority of the most outrageous umpiring decisions have been witnessed against India.

Earlier this season it was Steve Davis, an Australian, who had failed to spot big inside edges off the blades of VVS Laxman and Zaheer Khan on successive deliveries when the Indians were struggling to save the Test match against New Zealand. Both of them were shocking decisions and there was a clear hint of racial bias with Daniel Vettori being the beneficiary.

Now an umpire from New Zealand, Billy Bowden, mustered the courage to save England’s Ian Bell. It was a disgraceful decision to say the least. Bell was hit on his pads in line with the middle stump and the ball was staying low to take the height factor out of the equation. Everyone who saw the replay on the giant screen at the M A Chinnaswamy Stadium in Bangalore was taken by surprise.

It’s quite incredible how Bowden managed to do it in front of the capacity crowd. He ridiculously applied that 2.5-metre rule to ensure that Bell didn’t depart at that stage of the innings with England in the hunt while chasing a huge total. Upon Dhoni’s review the decision was referred to third umpire Rodney Tucker of Australia who endorsed the views of the field umpire which made a further mockery of UDRS.