Wasn’t it in the fitness of things that Mahendra Singh Dhoni, arguably the best present-day captain in world cricket, to lift another crown! He has proved himself an outstanding leader and he showed it once more why he has a league of his own.

Dhoni’s Chennai Super Kings, the reigning Indian Premier League champions, completed a double by pocketing the Champions League Twenty20 title at the Wanderers in Johannesburg on September 27. The skipper himself had the satisfaction of hitting the winning boundary.

It was yet another clinical performance by Chennai who outclassed the South African Twenty20 champions, Eastern Cape Warriors, by eight wickets in the final to collect the $2.5 million prize. The Warriors had to be content with a purse of $1.3 million.

The resounding victory in the final confirmed Chennai’s status as the best club team in the world in cricket’s shortest format. After having restricted the local favorites to 128 for seven, they romped home with as many as eight wickets standing. 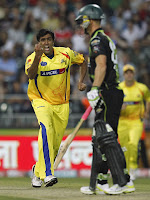 The wily off-spin of a man called Muttiah Muralitharan (3-16) and the teasing stuff from Man-of-the-Series Ravichandran Ashwin (2-16) broke the back of the Warriors batting. Then the Chennai openers Murali Vijay and Mike Hussey made half-centuries to seal the fate of the game.

“Winning the IPL and now the Champions League, it’s a very emotional moment for us The senior players have really done a good job. The environment has been superb and it can’t get any better than this,” Dhoni observed in his post-match comments.

The captain was full of praise for Ashwin. “He is used to bowling in the Powerplays. He is an aggressive bowler, he has the variety and he is always ready to bowl whenever you throw the ball to him. He wants to perform; he has grown as a player over the last three IPLs,” Dhoni said.

"There is a dressing room to show your emotions. As a captain, you are as good as your side. This is a very good bunch of people and as a captain you just want to channel all the energy into the same direction. The players put in great effort and frankly it feels very good to be the captain of Chennai Super Kings," he added.

"It’s indeed a very emotional moment. It’s the last game for many of us players as a team. However much you try, we can't retain all. These three years were great; we played good cricket. You develop a special bonding with each other. The dressing room atmosphere was great; not everybody could get a game but there was no ill feeling. Every one enjoyed each other's company. To end on a high feels really special," the triumphant skipper remarked.

Dhoni’s inspirational captaincy played a major role in the success of Chennai and his bowling changes and field placements remained spot-on although some of his moves were debated by the commentators.

"Dhoni that way takes lot of pressure off himself and he is someone who makes his players feel very secure. He is not a guy that you see outwardly making brilliant moves but he is quietly he is always encouraging his bowlers. When a bowler is hit for a six and if he has bowled a good ball, you will quietly see Dhoni applauding the bowler. That's all the bowler needs; that his captain has approved that ball," Sanjay Manjrekar, a former Indian batsman, complimented.
readmore »»

Trott's career could be cut short

Jonathan Trott was off to a fabulous start to his international career when he chalked u a century on his Test debut against Australia at The Oval last summer. He has done himself no harm by scoring consistently this season as well.

Having accumulated 1155 runs at an average of 55 in 13 Tests, he stands every chance of becoming a permanent member of the England batting line-up for quite sometime even though he is not very far away from his 30th birthday. He has the elusive technique of grafting an innings, possessing the skills to come good in tough situation by making adjustments of his own.

Yet his career could be cut short if he continues to be involved in ugly off the field incidents witnessed during the recently concluded series against Pakistan.

Reportedly he faces an England and Wales Cricket Board (ECB) investigation for allegedly hurling harsh words at a spectator during the third Test against Pakistan at The Oval. The ugly spat with a male spectator had taken place when Trott was fielding on the boundary on day four of the Test.

According to a source, Trott had reacted angrily and sharply after being mocked for his slow scoring rate the previous day.

“A well-to-do bloke in the crowd shouted out sarcastically, ‘Trott, well batted yesterday. Kept me entertained all day’!” News of The World quoted Trott, as saying. Two balls later, Trott, who hit 36 from 130 balls in a losing cause, stared at the fan before fuming at him.

Trott was already in the news for the wrong reasons after it was reported that the Pakistan Cricket Board (PCB) was considering legal action against him for allegedly calling left-arm fast bowler Wahab Riaz “a match-fixer”.

Trott and Wahab were involved in an angry bust-up ahead of the fourth One-day International at Lord's with Trott having allegedly asked Wahab 'how much are you going to make from the bookies today?' Riaz was then reported to have returned the compliment by making a comment about a member of Trott's family before the pair threw batting pads at each other. 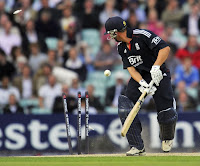 The altercation ended with Trott grabbing Riaz by the throat and the prospect of an all-out fight was only averted by England batting coach Graham Gooch, who pushed Trott away before putting an arm around the Pakistani fast bowler.

Shahid Afridi, Pakistan's one-day captain, later said that his team had considered filing a police complaint against Trott after his altercation with Wahab in the nets before fourth ODI.

“When Wahab was returning after warming up Trott called him a 'match-fixer' and that he was up to harming Test cricket and hit his face with the pad. t could have been a police case because it is a crime to hit someone. But we showed a big heart and did not press for it,” the Pakistan captain was quoted as saying.

He also confirmed that Pakistan had considered a making a protest in the wake of the confrontation. "There was talk of not going in for the toss because of the incident. But better sense prevailed because we wanted to play the match and we want this series to end properly,” he added.
readmore »»

The Commonwealth Games Federation (CGF) has blamed the Indian government for the chaos as complaints have kept pouring in from a number of teams about the poor state of the athletes' village for the 19th Commonwealth Games 2010 to be staged in New Delhi from October 3 to 14.

The preparations have also been hit by failures in the construction of venues. A bridge at the Jawaharlal Nehru complex, the centrepiece of the Commonwealth Games, collapsed leaving over 20 people injured. Then part of the ceiling at the weightlifting arena fell in the following day.

The Chief Executive of the CGF, Mike Hooper, has said that his organization should not shoulder the blame for the problems which have plagued the build-up to the event in Delhi.

He claimed that the repeated requests from the CGF's co-ordination commission earlier in the year to speed up construction fell on deaf ears.

"When we viewed (the Games village) in March it was clear it was a massive work in progress and a lot of work had to be done," he told Five Live's Sportsweek programme.

"Everybody including the chefs de mission who came from all the teams were aware of the construction status. We kept getting shown the various model units that had been done and assured. Yes, we realize we are on a tight schedule but we will all get it done and delivered to the same standard,” he stated.

"All the warning signs were there. We were pushing very hard, we kept pushing. You can lead a horse to water you can't make it drink. These people just did not understand, or seem to accept the magnitude of the problem. There were consistently missed deadlines. The government agencies have let everybody down over here as regards meeting those deadlines. But that said we have to make it the best it can be and that's what we're all hoping to do now,” he added.

England’s chef de mission, Craig Hunter, made the following observation after landing there. "It's not perfect. But we are where we think the accommodation is acceptable for us. The village had the potential to be five star, there's no doubt about that. We're at about three star at the moment. It's by far from being perfect but it is at a level that we think is acceptable and appropriate for athletes to come to an event and to compete."

The village faced further criticism with Indian boxer Akhil Kumar's bed reportedly collapsing when he sat down on it.

"We reached the Olympic Bhavan late in the afternoon to collect our accreditation cards. But when I sat down on my bed to take rest, it collapsed," Kumar, who will compete in the 56kg category at the Games, was quoted as saying.