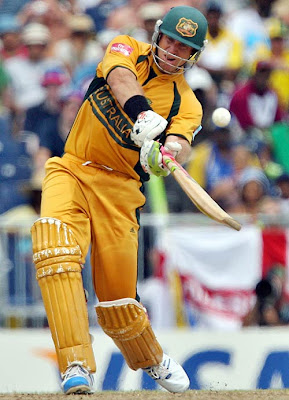 By Syed Khalid Mahmood
Matthew Hayden, having scripted many famous wins for his country, has decided to call it a day before he was treated as a liability for his team becoming progressively weaker with the departure of the tried and trusted campaigners.
Australia, in the coming years, could face similar crisis as the West Indies did after having ruled the world for quite sometime in the 1980s. The West Indians have never really recovered after having created a situation where the senior pros were asked to pack up.

Hayden’s absence will be sorely felt at the top of the order. He was the man who provided Australia, more often than not, the cracking start that demoralized the opposing teams. The big left-hander was not afraid to take the aerial route if the ball was pitched in his zone even in the first over of a Test match.

Australia indeed have a system in place that keeps throwing talented youngsters. Their academies groom the gifted teenagers and the standard of their domestic cricket is indeed higher than in any other country. But neither of these factors means that the seasoned guys like Hayden should be pressurized to quit the scene the moment they come up with below par performance.

The Australians have their own lifestyle but they have become little arrogant with the success they have accomplished in the past. But by letting go their stalwarts one by one, when they still had some years of cricket left in them, the concerned authorities are taking too big a risk.

Australia are yet to recover from the shock of losing people like Glenn McGrath, Shane Warne and Adam Gilchrist, all of whom were the tend-setters in their respective fields. Hayden was also one of them who symbolized aggressive cricket.
The departure of McGrath, Warne, Gilchrist and Hayden means they have now lost four genuine match-winners. The majority of the Australian triumphs during the era of Steve Waugh and Ricky Ponting were engineered by this quartet.

Damien Martyn, Justin Langer and Jason Gillespie were also brilliant cricketers but they were more often in the support cast. Their exit also deprived Australia of invaluable experience but their replacements did good enough to keep the momentum going. But it may not be possible to cover the losses of the once in generation kind of cricketers. 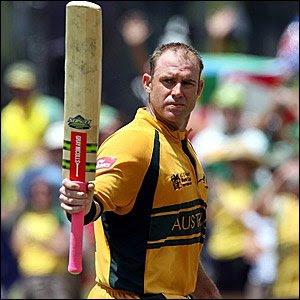 How quickly would Australia find a replacement for Hayden remains to be seen. He was a dasher who took the match away with the blink of an eye. His punishing knocks allowed Australia to dominate their rivals from the outset. It’s quite unlikely that any youngster would be able to fill in his shoes right away.

Enormous pressure was building on Hayden in his own country when runs had dried up off his bat this summer and he chose to call it a day gracefully like Gilchrist had done a year before him.

Hayden will be missed in international cricket. His awesome batting display will live in memory of those having watched him. The big man was the destructive opening batsman who had a most memorable World Cup in the Caribbean in 2007. The bowlers, particularly the new ball operators, would be relieved with his exit from the scene.