Beaconhouse School System and Fahim School System registered comprehensive victories over their respective rivals in the Group A matches of the Omar Trophy Inter-School Cricket Tournament 2016, being organized by the Pakistan Veterans Cricket Association (PVCA). 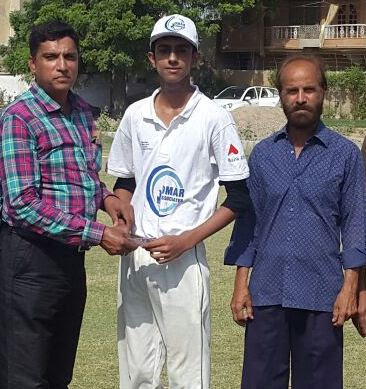 Batting first, after winning the toss, Beaconhouse School System recovered after an uncertain start to post a healthy total of 254 for nine off 40 overs.

Half centuries from Man of the Match Fawad Faisal (68 off 61 balls) and Hamza Rizvi (56 off 85 balls) put them in the driving seat after they had slumped to 98 for six despite Muaz Bin Salman’s hurricane 23 off 16 balls.

Medium-pacer Daniyal Nadeem (2-29) and leg-spinner Umar Shah (2-35) were the pick of the bowlers for CAA Model School.

Beaconhouse School System dismissed CAA Model School for only 56 in 18 overs to win the match by a staggering margin. Medium-pacers Hamza Tahir (3-21) and Ammar Iqbal (2-15) rocked the top-order and the clean-up job was completed by leg-spinner Muaz Bin Salman (3-12) and left-arm spinner Abdullah Masood (2-10).

Hasan Masood’s brilliant all-round performance, which earned him Man of the Match award, powered Fahim School System to a convincing victory over Ladybird Grammar School in the other fixture of the day.

Opening the Fahim School System innings he topscored for with 50 off 57 balls which included five hits to the fence. He dominated the 67-run first wicket stand with Asad Ehsan who made 20 off 41 balls.

The momentum was sustained by Saadi Ahmed (28 off 31 balls) which took the score to 91 for the loss of only one wicket near the halfway stage of their innings. But they lost their last seven wickets for only 26 runs to be bowled out for 158 in 35.4 overs.

Ladybird Grammar School fought back through some disciplined bowling from left-arm seamer Abdul Rafay (3-25), who was supported by left-arm spinner Amanullah (3-41) and medium-pacer Subhan Ahmed (2-11).

Chasing a target of 159 in 40 overs, Ladybird Grammar School was in with a great chance of winning the match when were 76 for two. But the complexion of the game changed with the dismissal of Amanullah who struck nine boundaries in his 36-ball 48.

Fahim School System’s spin duo of Hasan Masood (4-14) and Ahsan Ali (3-19) demolished the lower order as the last eight wickets crashed for only 23 runs and Ladybird Grammar School was all out for 99 in 21.1 overs.
readmore »»