It’s quite extraordinary how the sport of tennis keeps producing great characters who win the hearts of the millions with their artistry. Almost every era has had a living legend having charmed the followers of the game. 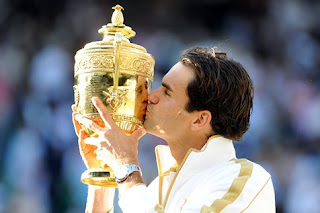 It was the turn of Roger Federer of Switzerland to rewrite the tennis history on July 5. By overpowering Andy Roddick in the Wimbledon 2009 final he has now become the greatest men's champion. It was his sixth Wimbledon crown and also a record 15th Grand Slam title.
The Swiss master broke the record of Pete Sampras who was watching the action in the Royal Box along with fellow legends Bjorn Borg and Rod Laver.

When Sampras had set the record in 2002 by winning the US Open final, not many people expected it to be bettered. But the emergence of the hugely talented Federer changed the course of history and it had appeared a matter of time for the record to be broken and it finally has happened.

The 27-year-old Federer, however, was made to work extremely hard to earn the sixth Wimbledon title and his duel with Roddick lasted no less than four hours and 16 minutes as it went to the wire. He had to bring all his expertise into play to overcome his threatening rival with the scores of 5-7, 7-6 (8-6), 7-6 (7-5), 3-6, 16-14.
Victory always tastes sweeter after such epic contests and Federer had every reason to feel on top of the world after having finally floored Roddick who had simply refused to give up. He ensured that there was no repeat of the last year’s final when he had been edged out in five-set final by his nemesis Rafael Nadal.

Federer must have become accustomed to withstanding the courageous fightbacks from his rivals. He has been engaged in numerous close battles and quite remarkably he has emerged triumphant more often than not.

Federer was certainly tested to his limits by Roddick and the tennis fans were kept glued to their seats wherever they were because the outcome was in doubt. History of sorts was created as Federer and Roddick fought it out what became the longest fifth set in Wimbledon's history.

Federer, like a true champion, kept his cool even at the tightest and tensest moments. He was observed motivating himself with a quietly growled Come-on. His Come-ons were not as loud or as aggressive as many of the past legends but there was no lack of intensity as he went for the kill. 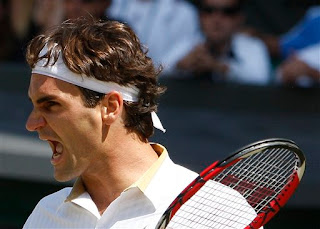 “Tennis is cruel sometimes. I went through some five setters in Grand Slam finals too and ended up losing. It's hard. He [Roddick] did great. He's not going to let his head hang down. He's going to come back strong and play great in the States. I think it's one of the best matches we played against each other. I really thought I had to play my very, very best to come through,” a visibly exhausted Federer observed after completing the most significant triumph of his illustrious career yet.