Posted by Editor at 12:13 PM .
0 comments
Labels: England v Pakistan 2010
By Syed Khalid Mahmood
Jonathan Trott and Stuart Broad saved England’s blushes with their 332-run world record stand for the eighth wicket in the fourth and final Test against Pakistan at Lord’s that ended rather prematurely on August 29.

England had themselves to blame to be cornered at 102 for seven on the second afternoon when the likes of Kevin Pietersen and Paul Collingwood looked like novices. 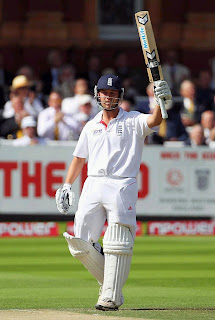 The English batsmen having grown up there are expected to be well versed in tackling the conditions that are generally alien to the visitors. It was pathetic to find all their big guns perishing so unceremoniously.

Mohammad Aamer was putting the ball in the right areas and there was plenty of movement and encouragement available to him. Yet it was inconceivable to watch the England batsmen demonstrate so much weakness in negotiating him.

Trott had not come from another planet although he had certainly arrived from another continent, being a South African by birth. He applied himself and made adjustment in his stance, standing way outside his crease, to negate the prodigious swing and that was it.

Trott was on top of the bowling when the senior ‘pros’ of his team were coming and going as if they had something more important to attend. It was really shameful cricket by England that morning which saw them reduced to 47 for five, after having resumed at 39 for one.

Matt Prior got the cue from Trott and together they saw off the remainder of the morning session. But another double blow soon after resumption saw them crash to 102 for seven.

Enter Stuart Broad. He had his credentials as a lower-order batsman but not many people would have expected the young left-hander to keep his cool in the intense pressure his team was under.

It was Broad who took the initiative of attacking the bowlers who had earlier been allowed to dominate and settle into a groove. Suddenly there were positive strokes on display. Initially they went straight to the fielders and one wondered if he would have the patience to stay focused. 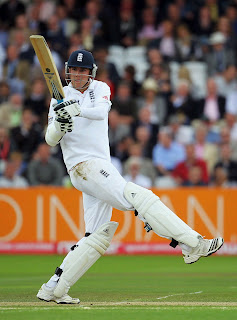 With his partner Trott in complete control Broad enjoyed the freedom of playing his natural game. The tactics worked and the runs started coming at a brisk pace.

The Pakistan skipper, Salman Butt, as expected neither had any backup plan or an alternate strategy to come to terms with the counter-attack. With no worthwhile advice coming from the dressing room either the momentum shifted and England moved into the driving seat.

The members of the Pakistan team management, Yawar Saeed, Waqar Younis and Shafqat Rana, were more absorbed in photo sessions at the balcony of Lord’s where they were celebrating the fall of every wicket as if that had come totally unexpected.

The partnership between Trott and Broad continued growing and it was broken only due to the technology. But the damage had been done and England merrily endured another mini-collapse to be bowled out for 446.

It was a huge first innings score and it looked even bigger when Pakistan were bowled out for 74 to concede a deficit of 372. Following on they fared little better and England won the match by an innings and 225 runs.
readmore »»