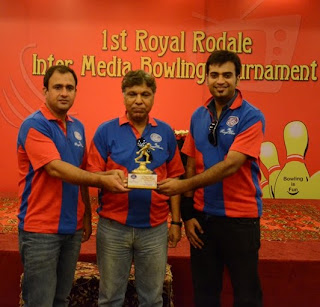 The third position was claimed by Pakistan Observer, featuring Zeeshan, Waqas and Hasnain who totalled 116 points and Dawn Television, having Faraz Qasim, Emmad Hameed and Fawwad Qasim, came a close fourth with their tally 115 points.

Saeed Ahmed of APP turned out to be the highest individual scorer with 60 points while his teammates Ehsan Qureshi and Shiraz Siddiqui accumulated 48 and 34 points respectively. Overall 54 bowlers representing various media organizations took part in the one-day event. 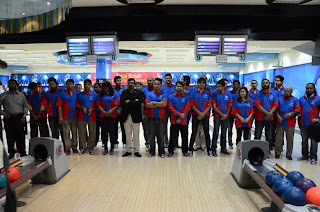 The Sindh Sports Minister, Dr Muhammad Ali Shah, who was the chief guest in the presentation ceremony, gave away the prizes and trophies.


Speaking on the occasion, Dr Shah, who is also the President of the Sindh Olympic Association (SOA), complimented Asghar Rangoonwala for promoting the game of bowling and providing reporters of print and electric media and new agencies an opportunity for recreation and entertainment in wonderful environments. He offered his total support and assistance for the promotion of bowling.

Asghar Rangoonwala revealed that Royal Rodale had invited a foreign bowling coach from Philippines to train and coach Pakistan players. He also informed the audience about their activities in promoting the sport. The Royal Rodale Club, which has been famous for hosting the meetings and conferences of the various chapters of the Rotary International and other social organizations, has also been proactive in boosting the sport of bowling in particular.
readmore »»