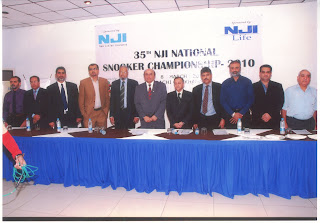 The New Jubilee Insurance (NJI), having become the major sponsors of the national cue sports tournaments, have offered to take care of an international snooker event later this year.

Tahir Ahmed, Managing Director, NJI, made the offer to the cash-starved Pakistan Billiards Snooker Association (PBSA), during the launching ceremony of the NJI 35th National Snooker Championship 2010 held at the Karachi Gymkhana Banquet Hall on February 25.

“It’s very heartening to note that NJI and snooker have become synonymous and we are encouraged to extend greater support to cue sports. We are prepared to sponsor an international snooker tournament in the second half of the current year whenever the PBSA is ready,” he offered.

The generous offer of Tahir Ahmed was certainly music to the ears of the officials of the PBSA and it was promptly acknowledged by their President, Alamgir Anwar Shaikh, who briefed the media about the Nationals 2010 to be staged here at the Karachi Gymkhana from March 2 to 8.

He announced the return of Mohammad Yousuf and Shehram Changezi to the national circuit. “Shehram, a former Pakistan number one, has qualified for the National Championship by winning the recently concluded Punjab Cup in Lahore while Yousuf, a former world champion, has made it through the Sindh Cup quota,” the PBSA President disclosed.

Alamgir Shaikh, however, could not come up with a convincing answer when asked if the decision of the Sindh Billiards & Snooker Association (SBSA), an affiliated unit of the PBSA, to allow direct entry to the veteran Yousuf without asking him to play in the Sindh Cup was in accordance with their constitution.

Yousuf, having won the National Championship on the highest number of occasions, was eliminated from the circuit following his inconsistent performance in successive ranking tournaments. He had to miss all the four national ranking tournaments last year after being denied wild card entry by the PBSA.

Alamgir Shaikh, having succeeded Ali Asghar Valika as the chief of the Association in 2008, regretted the recent decline in the governmental support to the game of snooker as he showed a comparison in which the lesser known games received much higher grants than the PBSA. 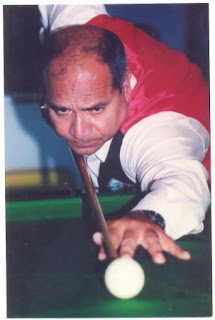 On the positive note the PBSA President disclosed that they have facilitated the participation of the finalists of the National Junior Championship, Muhammad Ahsan Javed of Punjab and Muhammad Ishtiaq of Sindh, in order to let compete with the top cueists of the country in the National Championship

“They will make it to the main draw automatically if there were two dropouts. They will still be included in the line-up if all the cueists do turn up in which case the number of participants in the National Championship will rise to 34,” Alamgir Shaikh explained.

Top four cueists from each of the four provinces, Punjab, Sindh, NWFP and Balochistan, earned the right to appear in the National Championship besides the top 16 cueists in the last national ranking chart. readmore »» 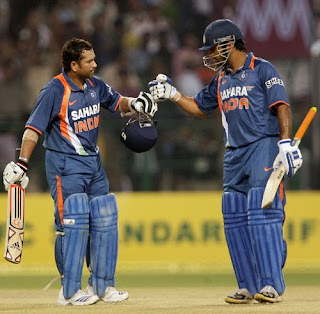 Yet another magnificent knock from Sachin Tendulkar powered India to a series triumph over South Africa, one of the best teams in the business at the moment in every format of the game.

India could not win the two-Test series, managing to square it after losing the first one by the heaviest of margins, but they have come up with better performance in the One-day Internationals closing the three-match series at the Captain Roop Singh Stadium in Gwalior that has remained their happy hunting ground.

Unlike the first ODI in which the South African tail-enders frustrated India against all odds there was no such drama in the second game where the hosts were able to dictate terms until the very end.

There was no guarantee for success for India even after they had posted a total of 401 for three in the allotted 50 overs. They had to come out hard against the South Africans and they did exactly that to prevent anything unusual close to one in the previous game.

In the end 153 runs separated the two sides that looked a fair reflection of the dominance of the home side. With their tidy bowling, the Indians didn’t let the visitors come up with anything extravagant to upstage them.

The limelight was very much on Tendulkar for having set up the monumental triumph but overall it was the team effort that allowed the hosts to remain in the driving seat all along on a day they might not forget for a very long time indeed.

It was one of those days when they were able to bulldoze their fancied rivals in every department of the game. Tendulkar stood out with his magnificent double century but the likes of Dinesh Karthik, Yousuf Pathan and Mahendra Singh Dhoni also made significant contribution with the bat to ensure a massive total.

The trio of Karthik, Pathan and Dhoni kept the score moving at brisk pace to let Tendulkar play his natural game. It could have been a different story to relate if the runs had choked at the other end that would have definitely brought pressure even on the Master Blaster in full cry. 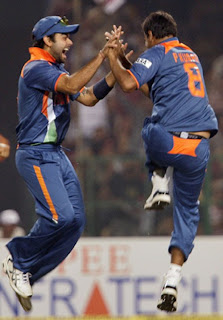 Dhoni’s captaincy, as usual, was spot it. His decision to promote Pathan and opt for the batting powerplay soon after his arrival turned out to be masterstrokes. Then the skipper himself fired on all cylinders in the death overs to let Tendulkar relax a bit in the 190s.

The disappointment of losing Virender Sehwag, who was caught at third man, early in the innings was not allowed to be felt because Karthik built a marathon partnership with Tendulkar and then the stage was set for Pathan and Dhoni to push the score past 400.

India had reasons not to feel complacent even while defending the monumental score because South Africa had successfully chased down 434 against Australia at the Wanderers not very long ago.

The Indians removed the danger man Herschelle Gibbs cheaply and then wickets kept on tumbling at regular internals. AB de Villiers scored a century without threatening to change the complexion of the game.

No one deserved it more than Tendulkar 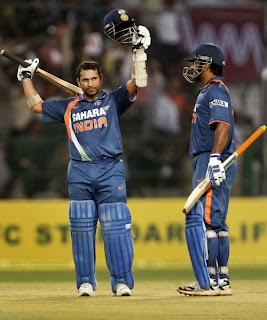 I am sure now very few people would argue about Sachin Tendulkar being the most accomplished batsman of all time. He has overcome injuries, lean patches and media trials at regular basis to prove himself as the greatest exponent of the art of batting.

The latest feathers in his cap are the highest individual score and the first-ever double century in One-day Internationals. His innings at the Captain Roop Singh Stadium in Gwalior on February 24 would be remembered for a very long time.

His record-breaking knock against one of the best bowling attacks of the world was a treat to watch and even the South Africans must have known that they were watching something well and truly special.

The manner in which he was dominating the bowling it appeared a matter of time for him to overtake Saeed Anwar and Charles Coventry, who held the record jointly for the highest ODI score. So was the case of his double hundred that seemed always on the cards if he batted for entire 50 overs.

"It feels good that I lasted for 50 overs, a good test of my fitness. I'd like to bat another 50 overs at some stage and see that the fitness level doesn't drop. The ball was coming onto the bat and I was striking the ball well. So when everything falls into its place, it feels nice. It was one of the innings where I felt I was moving well. Since I was timing the ball well, I could be more aggressive and put pressure on the bowlers,” the great man remarked at the end of the epic knock.

He dedicated his feat to the people of India and credited coach Gary Kirsten for the team's success in both forms of the game after the debacle in the World Cup about three years ago.

"I have enjoyed various challenges; after the 2007 World Cup things have looked different and I'm enjoying the game. The credit also goes to Gary Kirsten who has really held the team beautifully. It's about togetherness and playing for each other. You see during the practice sessions that Gary himself trains as hard as anyone else or probably harder than anyone else as he's the one giving us practice all the time,” Tendulkar remarked. 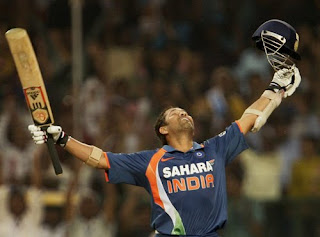 "When I was near 175-180, I thought I could get a 200 as there were quite a few overs left. I don't play for records. I play for enjoyment and play with lots of passion. That's how cricket started. I didn't start playing cricket to break all the records; it's happened along the way. The dream was to play for India and do my best,” he added.

"I don't think any record is unbreakable. Records are made to be broken. I hope that if this record is broke, it's done by an Indian," Tendulkar wished.

Well the records are indeed breakable but some of them are likely to stand for lifetime like the one Tendulkar is fast approaching. He is not very far away from becoming first batsman to score a century of centuries in international cricket, a record that may never be broken. readmore »»