It was a very pleasant evening on March 30 when Shoaib Ahmed Siddiqui, Secretary Sports & Youth Affairs to the Government of Sindh, formally inaugurated the KPC Summer Sports Festival 2010 with a crisp stroke on the snooker table. 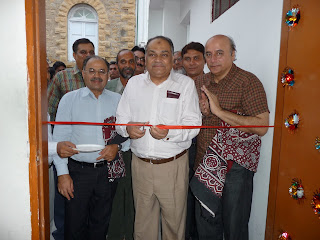 The festival, being organized by the Sports Committee, with the collaboration of the Indoor Games Committee, at the Karachi Press Club from June 30 to July 24, had actually commenced a couple of hours before the inauguration ceremony.

They were presented the traditional gift of Ajrak by the office-bearers and senior members of the Karachi Press Club.

In his opening remarks, the KPC Secretary, A H Khanzada, briefly threw light on the history of the club and expressing his joy at the revival of the sports festival for the members.

The KPC President, Imtiaz Khan Faran, recognized the importance of sports in building a healthy society and he expected the members of the club to participate in the sports festival with great enthusiasm. 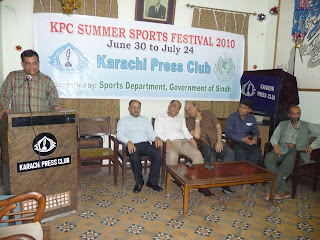 The chief guest of the evening, Shoaib Ahmed Siddiqui, showered the working journalists with praise for having taking up a challenging profession and performing their duties in the most demanding of situations.

He recalled the services of the KPC members in spreading information, making a particular mention of the former Presidents Sabihuddin Ghausi and Najeeb Ahmed who expired last year.

Shoaib Siddiqui spoke about the importance of the role of media in sports in particular and he acknowledged their contribution in a big way. He welcomed the revival of the sports festival at the KPC and assured his total support to the venture.

Shoaib Siddiqui was then escorted to the snooker hall where he performed the formal inauguration of the sports festival. He was highly appreciative of the arrangements made for the various tournaments.
As many as five games, snooker, chess, scrabble, badminton and table tennis, will be contested during the festival which is being supported by the sports department of the Government of Sindh.

The festival, offering cash awards to top performers, has commenced with the snooker tournament which will continue till July 3 and it will be followed by chess and scrabble (July 5 to 10), badminton (July 12 to 17) and table tennis (July 19 to 24). 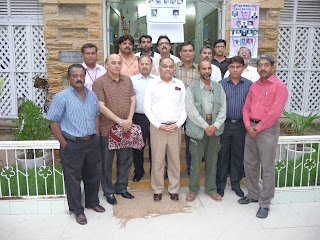 The snooker tournament is being held with the collaboration of the Pakistan Billiards & Snooker Association (PBSA) who have deputed Shoaib Alam Khan, an international referee, to conduct the event.

The Mind Sports Association of Pakistan (MSAP) has pledged to offer technical assistance for the chess and scrabble tournaments while the Karachi Table Tennis Association (KTTA) has agreed to join hands with the KPC in holding the table tennis tournament.
readmore »»