Greater emphasis will be laid in engaging young players from the educational institutions, besides roping in the stalwarts, in the upcoming fifth edition of the Hadi Cup Bridge Tournament to be staged later this year.

Instituted by Khurshid Hadi, Chairman, Mind Sports Association of Pakistan (MSAP), and a former President of the Pakistan Bridge Federation (PBF), in the memory of his illustrious father, the tournament is set to be organized by the Karachi Bridge Associates (KBA) in the last quarter of the year.

Interestingly Khurshid Hadi himself, in the company of his regular partner, Kamal Shoaib, had withstood all the challengers to emerge triumphant in the fourth edition of the Hadi Cup Bridge Pairs Championship 2015 which was held at the Aslam Bridge Hall, housed in the National Stadium, Karachi, last year.

The two veterans of Pakistan bridge, however, had opted to forego their winning purse and donated it to the KBA, who hosted the two-day event, contested by a total of 28 pairs. The total prize money in the event was Rupees one lac and there were a total of 10 prizes on offer, with four for the winners of each session and the top six position holders in the final points table.

Many of the leading players of the country, particularly those based in Karachi, which has been the hub of bridge activities for a number of years, had featured in the all the previous editions of the Hadi Cup, having become a regular annual event in the national bridge calendar.

The KBA as well as the Hadi family have now shown the eagerness to attract greater number of young players, particularly students who have been taking bridge classes at their respective educational institutions, because making occasional presence in the various competitions held from time to time.

Although the format and dates of the 5th Hadi Cup 2016 have not been finalized yet, the organizers are assessing the possibilities of making the tournament a team event instead of a pairs content, and it will announced well in advance to allow adequate time for registration to facilitate greater participation in it.
readmore »» 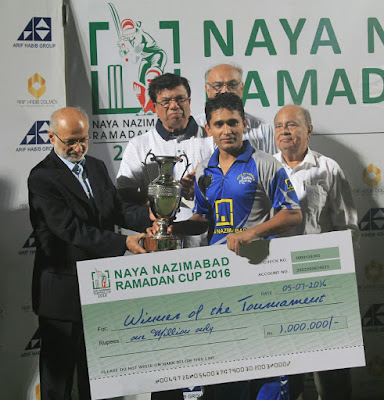 Batting first, SBP was restricted to 132 for seven in the allotted 20 overs. Skipper Israrullah was the top scorer with 29 off 25 balls, hitting five boundaries, while Farrukh Shahzad (22 off 35 balls) and Daniyal Rajput (18 off 14 balls) also reached double figures as the innings was rocked by Sadaqat Ali, who returned the figures of three for 24 off four overs.

SNGPL reached the target of 133 in the 19th over, after having lost a couple of early wickets. They were guided to a comfortable victory by the duo of Khurram Shahzad and Taimoor Sultan who added 104 for the third wicket without being separated.

Khurram Shahzad led the victory charge with a fluent unbeaten 63 off 45 balls with the help of five towering sixes and two fours. He was ably supported by Taimoor Sultan who remained undefeated with 47 off 51 balls, cracking three boundaries alongwith a solitary six.

The chief guest of the evening, Hussain Lawai, President, Summit Bank Limited, in whose name the cricket stadium is named, presented Man of the Match award of Rs 75,000 to Khurram Shahzad for his enterprising knock.

SNGPL’s all-rounder Hussain Talat, became richer by Rs 50,000 after being declared Man of the Tournament, having scored 165 runs besides capturing 13 wickets.

Mohammad Irfan of the Sui Southern Gas Company Limited (SSGC)\ was adjudged the best bowler, while Taimoor Sultan and Adnan Akmal, both of them from SNGPL, got adjudicated as the best batsman and the best wicketkeeper of the tournament respectively. They received a purse of Rs 25,000 each.