A total of 103 outfits from 50 cities, having been divided in 31 groups, will be participating in the 19th edition of the National Seniors Cup Cricket Tournament 2017-18 being organized by the Pakistan Veterans Cricket Association (PVCA) and sponsored by Omar Associates (Pvt) Ltd while Naya Nazimabad will be the co-sponsors. 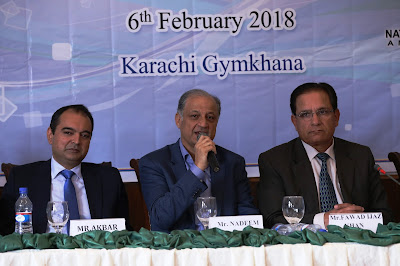 The details about the event, whose Southern Zone matches will be getting underway on February 10, were shared by Fawad Ijaz Khan, Chairman, PVCA, in a media briefing at the Karachi Gymkhana on February 6.

Fawad Ijaz Khan noted that the level of fitness of the cricketers, having crossed the age of 40, has improved considerably over the years primarily due to the introduction of the National Seniors Cup.

Nadeem Omar reckoned that the senior cricketers were also making a significant contribution in the development of the sport, complimenting the PVCA to have withstood the challenges and delivered against the heaviest of odds.

Akbar Puri informed that besides installing floodlights at the Karachi Gymkhana Cricket Ground, the club was looking forward to having more proactive role in cricket in near future.

It was disclosed that 34 city teams from Punjab, 8 from Khyber Pakhtunkhwa, 5 from Sindh, 2 from Islamabad one from Baluchistan will be taking part in the tournament whose national final, to be contested between the Champions of Northern and Southern Zones, will be taking place in Karachi on 22nd April. The total prize money in the event will be Rs 694,000.

Karachi Gold Bridge will be taking on Karachi Lucky Knitts in the inaugural match of the Southern Zone  at Naya Nazimabad Cricket Ground on February 10.

In the Southern Zone competition, Omar Associates, Fact Date Engineering, A A Pakwan, CAA and Quetta are placed in the Group A while the Group B comprises of RLCA, Gold Bridge, Airport Gymkhana, Haseen Habib and Lucky Knitts with Hyderabad, Badin, Jamshoro and Mirpurkhas being the drawn in the interior Sindh group.

The group matches of the Southern Zone, taking place at Karachi and Hyderabad, will be of 20 overs each innings whereas the Zonal finals as well as the National Final will be of 30 overs per innings. The group matches will be organized on single league basis.

The matches of the Northern Zone, having got underway last November, are being played at Rawalpindi, Bahawalpur, Multan, Okara, Lahore, Kasur, Sheikhupura, Muridke, Faisalabad, Gujranwala and Sialkot while the matches of the Southern Zone will be played at Karachi and Hyderabad.

Amjad Islam Rishi will be the Tournament Coordinator while the Southern Zone Committee will be headed by Alamgir Ahmed.

The National Seniors Cup, contested annually between the selected teams of the various cities, has been organized by the PVCA every season since they its launch in 1998.