Larkana emerged triumphant in the second edition of the Sindh Inter-District Judo Championship 2017 which concluded at the Dewa Complex in Gulshan-e-Iqbal, Karachi. 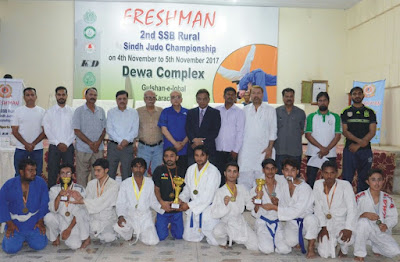 Sanghar ended as the runners-up and Mirpurkhus stood third in the two-day event which was organized by the Sindh Judo Association (SJA) with the collaboration of the Sindh Sports Board (SSB) and sponsored by Kohinoor Soap and Detergent (Pvt) Limited.

A total of 24 players from six districts participated in the championship which was won by Larkana, who accumulated 36 points as they secured two gold medals and one bronze medal.

There was tough fight for the top slot between Larkana and Sanghar districts with a solitary point separating the two outfits. Sanghar had to be content with the second position with a tally of 35 points as they claimed a gold medal besides two silver medals.

Mirpurkhas earned 15 points by winning three bronze medals to take the third position while Hyderabad was relegated to the fourth slot with an aggregate on 10 points. Sukkur and Nawabshah jointly shared the fifth position in the table by winning a bronze medal each. 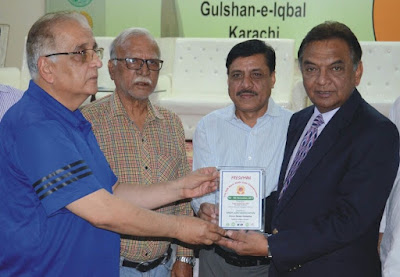 Contests were held in the three weight categories of 50 kg, 56 kg and open weight. The 24 participants were initially engaged in preliminary round fights.

In the finals, fierce bouts took place between the judokas of Larkana and Sanghar while defending champions Sukkur were unable to reproduce the form they had displayed in the inaugural championship.

Syed Wasim Hashmi, President, SJA, in his welcome address during the presentation ceremony, spoke about the recent initiatives undertaken by the provincial body in the further development of judo.