The curtain has fallen to the second edition of the Indian Premier League (IPL) that had to be staged in South Africa instead of India where it was launched with great fanfare last year. 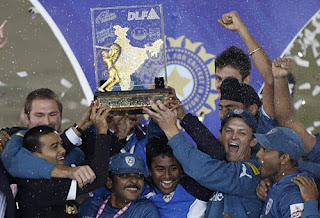 The IPL 2009 produced far too many upsets and it was more about the tales of unexpected rather than anything else. Cricket is indeed a very uncertain sport but the manner in which some of the matches took place in the competition took many people by surprise.

Wtth the upset results being the order of the day there was absolutely no element of surprise in watching the wooden spoonists of the inagural IPL going on to play the final of the IPL 2. Yes it were Deccan Chargers and Royal Challengers Bangalore, who shared the last two positions last year, contested the final this time round.

Who would have believed at the start of the tournament that Deccan Chargers and Royal Challengers Bangalore will be the contestants of the final. But with the unlikeliest of things happening throughout the month nothing could have been ruled out either.

The final was not spared of the unexpected drama as well. Bangalore appeared to have all cards in their pocket when Rahul Dravid and Ross Taylor proceeded to the dug out at the stretegic timeout.

But as the trend had been throughout the tournament, the complexion of the game changed after the resumption of play. Not sure what strategy the Bangalore team discussed, they lost the plot so quickly much to the disappointment of their large number of fans.

One would have expected the likes of Dravid and Taylor to take the responsibility and take their team to the finishing line without any hassle because the asking rate was quite manageable and there wasn’t anything wrong with the pitch either.

But it was IPL and there had to be twists and turns. Deccan Chargers came back from the dead to win the final and it was Adam Gilchrist, not Anil Kumble, who got the privilege of lifting the sensational trophy. 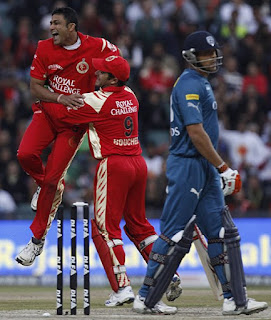 Kumble, who had bowled exceptionally well, was let down by his batsmen and it must have been very frustrating for him to end up on the losing side despite having dominated the proceedings for so long.

Gilchrist had it the other way round. He had perished without scoring on the second ball of the innings, having been foxed by the wily Kumble. The former Australian wicketkeeper-batsman knew he had very little runs to play with when he led his team out on the park. The match was still in the Bangalore’s bag at the halfway stage of their innings.

But a dramatic collapse earned Gilchrist a new lease of life and he was all smiles by the time his team had completed a remarkable comeback victory.

Kumble had the consolation of picking up the Man of the Match award in the final but he would certainly preferred to grab the trophy that was collected by Gilchrist.
readmore »»