West Indies save Antigua Test with skin of their teeth 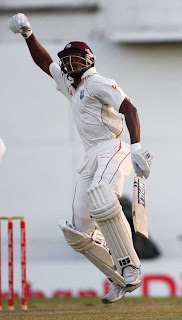 The West Indians, under fire in the recent past for having succumbed to defeats from position of strength, have starting showing great resilience lately and a great batting performance earned them a draw in the third Test against England at the Antigua Recreation Ground in St John’s, Antigua.

If it was the sensational spell of fast bowling of Jerome Taylor that enlivened the proceedings on the fourth afternoon of the first Test at the Sabina Park, Kingston, as England crashed to 51 all out giving the West Indies an innings victory, it was the last pair of Fidel Edwards and Daren Powell who bravely resisted the England bowlers for over half an hour to secure a draw for the hosts.
Although it may still be premature to say with conviction if the present West Indian team will continue coming off consistently but their performance against England certainly augurs well for the future.
It’s not often that the West Indians have applied themselves and displayed the level of commitment that we have witnessed recently. Chris Gayle doesn’t have the resources Clive Lloyd or Vivian Richards had had at their disposal but the credit goes to the present team management for having got the best out of the boys.
By saving the game, the West Indies have inched closer to recording a rare Test series win. With two games still to be played, England are not out of it yet but they might find it very difficult to floor the home side whose fierce determination in the field must have gladdened the hearts of their supporters all over the Caribbean islands.
Andrew Strauss, having taken over the captaincy following the resignation of Kevin Pietersen in controversial circumstances, must be wondering where he went wrong in allowing the West Indies to escape with a draw in a Test match that looked in England’s grasp from the day one.
The decision of Strauss not to enforce the follow-on on the third evening looked debatable. He probably misjudged the state of the wicket or may be he was not fully satisfied with the fitness of his key bowlers. His counterpart was also guilty of misreading the pitch when he opted to field first after winning the toss.
The odd ball was certainly keeping low from the first day but the pitch didn’t break up as much as was being anticipated on the following days. The pitch didn’t deteriorate that badly and even the West Indian tail-enders managed to hang on.
Strauss may also face criticism for having delayed the declaration on the fourth day but the fact remains that he didn’t desire giving the West Indies any chance whatsoever of getting to the target. After all it was at the same ground where the hosts had successfully chased down a world-record target of against Australia about six years ago. 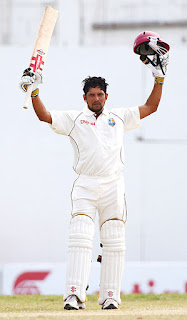 But the England skipper also deserves accolades for having preferred off-spinner Graeme Swann over left-arm spinner Monty Panesar. Same was the case of Owais Shah who replaced the struggling Ian Bell. Both Swann and Shah rose to the occasion and they are likely to be part of the playing eleven in both the remaining Tests.
Strauss himself batted exceptionally well and his magnificent knock of 169 helped England post a commanding first innings total.
Talking of batting, Ramnaresh Sarwan played a couple of fabulous knocks in the game. He narrowly missed the rare feat of scoring a century in each innings of the match. He batted fluently in both the outings.