Hosts Bangladesh will be needed to appear in the first round, serving as the qualifiers for the Super 10 stage, in the next year's ICC World Twenty20 to be staged there from March 16 and April 6.

According to the details announced by the International Cricket Council (ICC) on October 27, Bangladesh will be grouped with three other Associate and Affiliate nations who will come through the qualifying tournament due to be staged in the United Arab Emirates (UAE) from November 15 to 30.

The format for the World T20 2014 has been modified in order to accommodate 16 teams this time round as compared to 12 in the last edition. The top eight sides of the ICC's T20 team rankings as on October 8, 2012 have been given direct entry into the Super 10 stage.

Unsurprisingly Australia, England, India, New Zealand, Pakistan, South Africa, Sri Lanka and the West Indies are the eight teams having directly qualified for the Super 10 stage by virtue of being the top eight sides in the ICC rankings on the cut-off date.

Bangladesh and Zimbabwe, who have finished outside the top eight, will now have compete with six other qualifying teams in the first round from March 16 to 21 for the remaining two places in the Super 10 groups. 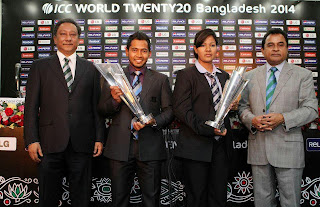 The six qualifying teams to join the first round will be decided at the end of the World T20 qualifiers next month. If hosts Bangladesh do qualify they will play all Super 10 matches in Mirpur.

Bangladesh will begin their campaign in the qualifying rounds, also in Mirpur, on March 16, against one of the Associate or Affiliate qualifiers. They will play the other two first-round matches, in Chittagong, on March 18 and 20.

The Super 10 stage will kickoff with a Group 2 match between the arch rivals and former World T20 champions, Pakistan and India, in Mirpur, on March 21 while holders West Indies will get into action on March 23 against India in Mirpur and will play the rest of their group matches against Pakistan, Australia and a qualifying team.

The Group 1 in the Super 10 stage will comprise of Sri Lanka, England, South Africa and New Zealand with one of the qualifiers. 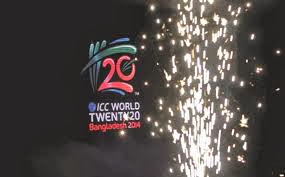 Meanwhile Cox's Bazaar has been dropped as a venue for the 2014 World T20 to be held in Bangladesh between Sylhet, another venue considered doubtful due to ongoing work at the stadium, has been retained.

The ICC has announced that Sylhet would host all first-round fixtures of the Women's World T20 and a few group matches of the World T20, along with Mirpur and Chittagong while all the six knockout matches will be played in Mirpur.

Sylhet and Cox's Bazaar had been in doubt because of ongoing development works being carried out at the stadiums and were granted an extension until November 30 by the ICC upon a request by the Bangladesh Cricket Board as the original deadline for the completion of the stadiums was September 30.
readmore »»