The Customs Cricket Academy (CCA), founded by former Test fast bowler Jalaluddin, can very rightly claim to be the second home to the enterprising all-rounder, Shahid Afridi, who turned out to be of the architects of Pakistan’s recent triumph in the ICC World Twenty 20 in England. 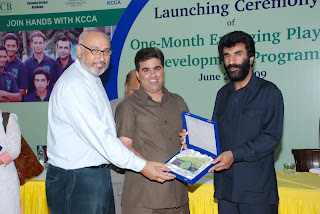 The founding chief coach of the CCA, Jalaluddin, who recorded the first-ever hat-trick in One-day Internationals, brought to light this fact while briefing the media about the one-month Emerging Players Development Programme at the Gymkhana Karachi Gymkhana less than 12 hours after Pakistan were crowned as the world champions in the latest version of the game at Lord’s.

“Shahid Afridi trains and practices at our academy whenever he is around in Karachi. He has also made a point to coach our camp trainees from time to time. His spectacular performance in the ICC World Twenty20 will greatly inspire the youngsters of our country who always look forward to him for motivation,” Jalaluddin added.

Giving details about the event, a part of the CCA’s first decade of excellence celebrations, Jalaluddin informed the media corps that a total of 24 promising youngsters have been selected for the Emerging Players Programme on the basis of their performance in domestic tournaments.

The Federal Minister of State for Industries and Production, Dr Ayatullah Durrani, launched the programme formally at the Karachi Gymkhana on June 22. A football player himself, hailing from the hilly town of Mastung in Balochistan, the Federal Minister believed that Pakistan’s conquest in the Twenty20 will be helpful in lifting the morale of the whole nation having had to endure tough phases over the years.

Dr Ayatullah Durrani delivered an inspirational speech in which he touched about the subjects the ruling parliamentarians generally like to avoid. He complimented the CCA, founded in 1999, to have taken up the initiative of organizing the Emerging Players Development Programme with the collaboration of the Karachi City Cricket Association (KCCA).

“It’s very heartening to note that Jalaluddin and his panel of coaches are carrying out such healthy activities. Their organizational capabilities is well known and I am confident that they hold all their upcoming events brilliantly as they have planned celebrate the 10 years of existence of the Academy in a grand manner,” he added. Prof Siraj-ul-Islam Bokhari, Secretary KCCA, in his rather brief speech, talked about the summer coaching clinics organised by the association over the years. He hoped that their joint venture with the CCA would yield even better results than the past.

The panel of coaches for the Emerging Players Development Programme will comprise of Jalaulddin, Azam Khan, Umar Rasheed and Shaukat Mirza, all of them having undertaken various levels of coaching programmes.