Who would have imagined of the Pakistan hockey team winning the gold medal in the Asian Games in Guangzhou after they had finished last among the 12 participating outfits in the World Cup in New Delhi earlier this year?

There were cries from every nook and corner of the country to bring the ‘culprits’ to book who had caused the humiliation to Pakistan hockey at the international level. A battery of former greats launched a nation-wide campaign to get rid of the personnel whom they considered responsible for the debacle.

As has been customary during the last couple of years in particular, the concept of check and balance is on the way to extinction in this part of the world and those enjoying the political clout have virtually been declared above the law.
If Ijaz Butt could be allowed to continue heading the Pakistan Cricket Board (PCB) despite his repeated failures and with so many corruption charges mainly because he’s the brother-in-law of an influential Federal Minister there seemed no logic why Qasim Zia or Asif Bajwa would have been removed from the Pakistan Hockey Federation (PHF) for they had their own trusted connections in the corridors of power.

The former Olympians had spearheaded a full fledged movement to oust the PHF bosses but all their efforts failed. Instead of taking them to task and quizzing them, the government officials gave a stronger vote of confidence to the persons who had brought about the disaster.

Qasim Zia and Asif Bajwa, like Ijaz Butt in cricket, were granted the lincence to kill it hockey. They were publicly told to run the affairs according to their whims and to ignore the criticism from all quarters.
Under these circumstances it would have come as no surprise if Pakistan finished last in the Asian Games as well. There would have been no inquiry and no questions asked. Nobody would have bothered to criticize them or to raise any concern because all their energies were consumed earlier. 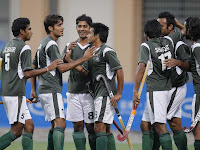 But as the luck would have it, Pakistan have won the gold medal. They had previously done it seven times but on each occasion they were one of the favourites to lift the title. This is the first time that they have claimed first position when even their entry in the semifinals was not guaranteed.

That’s how the Pakistan sports has been moving of late. They need miracles and they keep getting it somehow. When the Nature comes into play obviously everything else takes a backseat.
It’s quite incredible to say the least how Pakistan have managed to lift the hockey crown at Guangzhou. To have overpowered the in-form teams like South Korea and Malaysia in the knockout games was amazing. 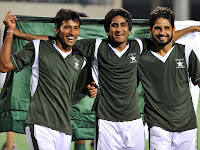 Many people would have written them off when they lost to India in their league matches. But they were taught the lesson once more that it’s never advisable to write off Pakistan until they are actually out of it.

Specialist drag-flicker Sohail Abbas and veteran sriker Rehan Butt scored the goals in the final against Malaysia, who had to settle for silver in their maiden appearance in the title clash after winning the bronze medal six times.
The Malaysians couldn’t play to their potential in the final and Amin Rahim, whose two late goals floored India in the semifinals, faltered in all three penalty corners his team earned
readmore »»