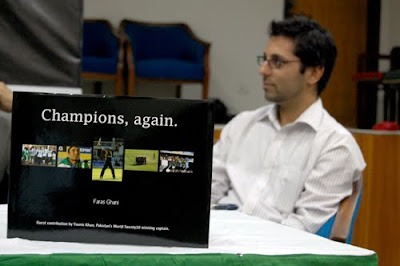 There was an element of disappointment but not entirely surprising to note Younis Khan and Shahid Afridi, Pakistan’s captain and vice-captain respectively in the ICC World Twenty20 Cricket Tournament held earlier this year in England, skipping the launching ceremony of the book celebrating the title triumph against the heaviest of odds.

Neither Younis Khan nor Shahid Afridi turned up in the launch of ‘Champions again’ authored by Faras Ghani, at the Defence Central Library in Karachi on December 2, despite being extended the invitation to grace the occasion.

The absence of both these celebrated cricketers looked even more stunning and disappointment when they were believed to be in town. Their presence would have brought greater life to the ceremony.

In the context of their behaviour before and after the event there was hardly any surprise in not seeing them on a spot where their own accomplishments were being eulogized and celebrated. They have always considered themselves above board, disregarding national interests and even more painfully their acts have not been worthy of heroes.

Life does move on and the book launch function remained lively anyways with the likes of Salahuddin Ahmed, a former Test all-rounder and an ex-chairman of the national selection committee, keeping the audience fully absorbed with his typically crisp speech. Very rightly, he described the 96-page book as an outstanding effort.

Jalaluddin, a former Test fast bowler and Head Coach of the Customs Cricket Academy (CCA), reckoned that such books go a long way in encouraging the youngsters to take to cricket.

Rishad Mahmood conducted the proceedings nicely and his own depth of knowledge contributed in enlightening those present on the occasion.

Author Faras Ghani, having relocated in England after being born and bred in Karachi, shared with the audience his views on the ups and downs of the Pakistan cricket, recalling some of the incidents of the tournament that Pakistan won after the most uncertain of starts.

The book recaptures the excitement of the event in Pakistan had toppled fancied teams like South Africa and Sri Lanka to claim the trophy at Lord’s. It was after 17 long years when Pakistan had won an international cricket tournament. 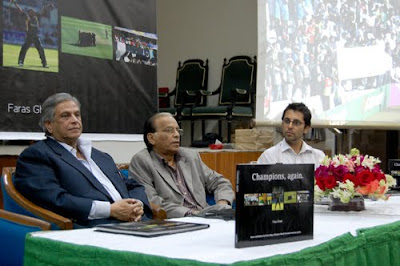 ‘Champions Again’ is a welcome addition to the list of cricket books in Pakistan and Faras Ghani was complimented for having made an invaluable contribution to cricket literature.

Besides being a wonderful writer, who is extremely passionate about the sport, he also has developed a fondness for clicking. Yes quite a few of the photographs published in his book could challenge some of the top professionals in the field.

I think he should be satisfied or even gladdened by having launched his maiden book in an impressive ceremony. Hopefully the book will bring for him further recognition and this would prove to be the first of the many to be penned and compiled by him.