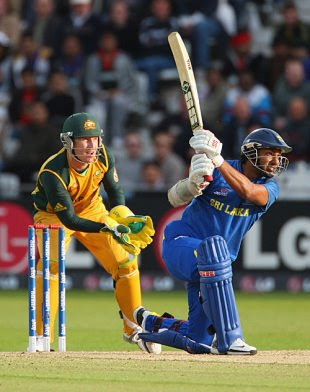 The body language of Ricky Ponting said it all. He knew it was curtains for his team as far as this tournament is concerned long before Mitchell Johnson’s wide down the leg side brought up Sri Lanka’s six-wicket win at Trent Bridge on June 8.

It was a must-win game for Australia, after having been thrashed by the West Indies in their opening game. Ponting must have been aware of the fact that the Sri Lankans were a more balanced outfit than the West Indians and their work was cut out against Kumar Sangakkara’s men.

As in their first game, the Australians didn’t get off to the kind of start that was essential to post a formidable total. In fact they lost a wicket in the very first over once more leaving Shane Watson to do the job of repairing the job with the skipper. The early departure of the explosive David Warner must have upset their plans of getting after the bowling from the outset.

Watson and Ponting did well to pull it back but the drama began with the introduction of the mystery spinner Ajantha Mendis, playing his first-ever game against the mighty Australians.

Even Ponting, arguably the greatest batsman of the world, was unable to come to terms with the deadly varieties of the magnificent Mendis. It was a cracker of a delivery that castled the champion batsman who was clueless whether to come forward to drive or rock back to defend.

Watson was even more confused while tackling Mendis and he was adjudged leg before after having survived a close shout earlier in the same over. Later Mike Hussey, the most accomplished of batsmen against spin bowling, was also foxed by Mendis.

The Australian innings was in disarray with the swinging yorkers of Lasith Malinga perfectly complementing the magic of Mendis. The great Mutiah Muralitharan was bang on target as usual, giving nothing away in his first three overs.

Australia, following the middle-order collapse, were in danger of being bowled out for a very low total. But a cameo from Johnson, who was particularly severe to Muralitaharan of all people, saw them reach a fighting total in the end. 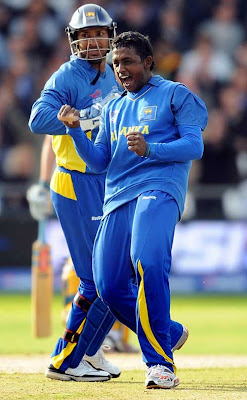 The Sri Lankans were set a target of 160 in 20 overs and the Australians had to get wickets at regular intervals to stay afloat which they couldn’t. They did get rid of the experienced duo of Sanath Jayasuriya and Mahela Jayawardene cheaply but the half centuries from Tillakaratne Dilshan and skipper Sangakkara hurt them badly.

Sangakkara stayed at the crease till the end ensuring that was no panic near the end even though the asking rate had climbed to around nine an over. His presence in the middle allowed the young Jehan Mubarak to launch a murderous assault that settled the issue decisively.

Ponting tried everything he had up his sleeves. He rotated his experienced fast bowlers but the complexion of the game could not be changed. His face expression kept reflecting the pressure he was under.

Ireland throw Bangladesh out of competition 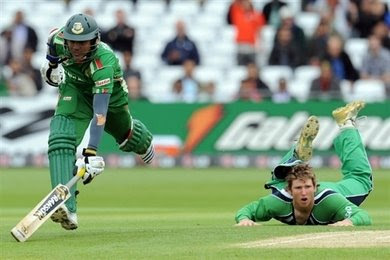 Ireland had stunned everyone by making it to the Super Eight of the 2007 World Cup in the Caribbean and they have done it again in the shortest version of the game.

What a great start they have made in the ICC World Twenty20 2009, hammering Bangladesh by six wickets with 10 deliveries remaining. They have progressed to the next round of the competition, alongwith the defending champions India, from Group A.

Bangladesh, who had also made a surprise entry in the Super Eight of the 2007 World Cup, have been knocked out after losing their second game in succession.

It was a must-win game for Bangladesh at Trent Bridge, after having succumbed to defeat at the hands of India in their first outing. Their batsmen were unable to get going and their eventual total of 137 wasn’t testing enough for the spirited Irish side.

The Bangladesh batsmen were guilty of not applying themselves. The top three got starts but perished without making an impression. They needed to stay at the wicket for a longer time to lay the foundation for a big score.

Their top half was back in the dugout with only 66 runs on the board and less than 10 overs remaining. It was reckless batting that put them under enormous pressure and the Irish bowlers, more familiar with the weather conditions, didn’t let the batsmen score freely.

Ireland were in complete command of the situation having reduced their opponents to 117 for eight at the end of 19 overs. Bangladesh got a lifeline through the well-built Mashrafe Mortaza who helped his side collect as many as 20 off the final over. He remained undefeated on 33 off 16 balls to emerge the topscorer in the innings.

Ireland, who would have thought of chasing down something around 125, were suddenly set a target of 138 that wasn’t all that high but it demanded them to be little more focused.

Trent Johnston was the pick of the Ireland bowlers, claiming three wickets for only 20 runs off his four overs. The other bowlers pressed into service by William Porterfield also did the job, cashing in on the self-defeating approach of the Bangladesh batsmen who never thought of stabilizing the innings. 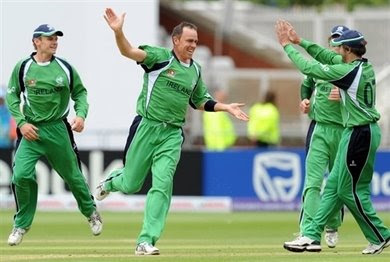 The target of 138 wasn’t a big but Ireland needed to stay positive to knock off the runs and get a head start in the tournament. They survived a few anxious moments before completing the job in the penultimate over. Their batsmen showed much more application and discipline to ensure that the great work of the bowlers earlier in the day was not undone.

The O'Brien brothers were brilliant once more and their resilience earned another famous victory for Ireland. Kevin O'Brien’s unbeaten 39 off 17 balls was another fantastic effort as he clobbered a couple of sixes besides five fours.

Earlier Niall O'Brien, coming in at number three, had struck three sixes and as many fours in his 25-ball 40 to keep his team in front. The skipper himself did the anchoring role and the tactics worked perfectly in the end.