The man having played around with the sentiments of the whole nation for nearly two years, Ijaz Butt, owes a public apology for his haughty attitude and irresponsible behaviour in running the affairs of the Pakistan cricket. 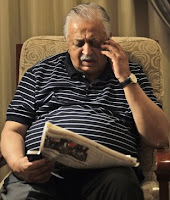 He has issued an apology for the comments he made during the recently concluded one-day series between England and Pakistan when he charged that the hosts' players had taken "enormous amounts of money" to lose the third One-day International at The Oval.

The England players have reportedly accepted his apology and withdrawn the threat of legal action which had loomed since the outburst.

Ijaz Butt, known for talking senselessly, admitted that he had no evidence to back up his claims and that he regretted the "misunderstanding" that followed even though he initially refused to back down from his comments. Well he had not only leveled the allegations just one time but did it repeatedly.

"I wish personally and on behalf of the Pakistan Cricket Board to withdraw the comments I made concerning the England and Wales Cricket Board and each of the England players who played in the one-day International at The Oval on Friday 17 September. It is regrettable that there was a misunderstanding arising from my comments,” he observed in the letter of apology.

"I would like to make it quite clear that in the statements which I made that I never intended to question the behaviour and integrity of the England players nor the ECB nor to suggest that any of them were involved in any corrupt practices or in a conspiracy against Pakistan cricket,” Ijaz Butt added.

"In particular, I wish to make it clear that I have never seen any evidence of any wrongdoing by any England player or the ECB at any time," he added.
"I deeply and sincerely regret that my statements have been interpreted to cast doubt upon the good names of the England players and the ECB and hope that this public withdrawal will draw a line under the matter," the PCB Chairman stated.

So far so good. Ijaz Butt has set the record straight by issuing the apology that had always seemed on the cards for mending fences with the ECB.

Shouldn’t the PCB Chairman now be asked to apologize to the people of Pakistan for his continuous misdeeds and mischief. He has been guilty of ruining the image of the Pakistan cricket and it may take many years to clear the mess he has created in two years time.

Ijaz Butt has had the knack of losing his cool during conversations with the media. He gets offended whenever a probing question is hurled at him and instead of giving an answer he tries to take on the interviewer.

Doesn’t the PCB Chairman know that he’s holding a public office and cricket is the game of the masses in Pakistan. People only wish that some accountability system was in place and Ijaz Butt should be tried for having caused irreparable harm to the national interest.
readmore »»