Happy Palace School and Springfield School tamed their respective rivals in the latest matches of the Omar Trophy Inter-School Cricket Tournament 2016, being organized by the Pakistan Veterans Cricket Association (PVCA). 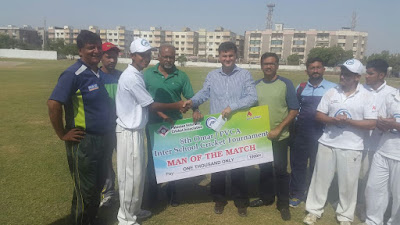 Happy Palace School whacked Fatimiyah Boys School by 148 runs in their Group B encounter at the Naya Nazimabad Lawai Stadium while Springfield School edged out Aga Khan Higher Secondary School by 25 overs in their Group E fixture at the KCCA Stadium.

Put into bat, Happy Palace School got into commanding position through the 119-run third wicket partnership between Sameer Khan (76 off 90 balls) and Zaid-ul-Abedin (60 off 41 balls) after opener Moazzam Ghauri (22 off 27 balls) had seen off the new ball. After the spinners had struggled to keep the batsmen down,

Fatimiyah Boys School’s third medium-pacer, Mohammad Aashir produced an aggressive spell of four overs in which he claimed five wickets for 25. He brought about a collapse which saw Happy Palace School succumb to 236 all out in 36.1 overs after being 198 for three not long ago.

Fatimiyah Boys School, chasing a target of 237 in 40 overs, raised 50 of the innings for the loss of only one wicket but they were rattled by the off-spin of Moazzam Ghauri, who picked up four wickets for only 14 runs to win Man of the Match award. Leg-spinner Zaiu-ul-Abedin bowled a sensational over in which he captured three wickets to send the opponents tumbling to 87 all out in 25.1 overs.

Springfield School and Aga Khan Higher Secondary School got engaged in a fierce battle in the other match of the day in which 207 runs were scored for the loss of 20 wickets in 60.1 overs.

Electing to bat, after winning the toss, Springfield School was bundled out for 116 in 24.3 overs with leg-spinner Khadim Hussain picking five wickets for 28 after Mubashir Amin (30 off 37 balls) and opener Saim Ayub (27 off 37 balls) had laid the foundation for a competitive total.

Springfield School fought back gallantly to successfully defend what had looked like a modest total. Leg-spinner Ali Nasim (4-23), declared Man of the Match, played the lead role in bowling Aga Khan Higher Secondary School out for a meagre 91 in 35.4 overs.