World snooker champion, Mohammad Asif, received an unexpected jackpot when Nadeem Omar, a sports promoter and philanthropist, presented him a cheque of Rs two million in a ceremony organized in his honour by Omar Associates at the Karachi Gymkhana on August 26. 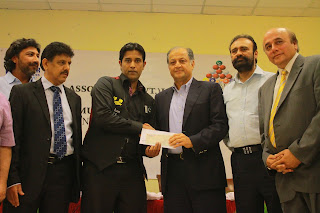 The hurriedly arranged function, which was planned less than 48 hours ago, brought broad smiles on the face of the Faisalabad-based Asif for whom it was the single biggest purse to be received after bringing home the world title last December.

“Hats off to him for choosing to reward our world champion so gracefully. We have been made to run from pillar to post to procure the cash awards announced for Asif by the various other personalities but Nadeem Omar stands out not only for the amount of money but also for the admirable manner in which he has done so,” the PBSA President recognized.

Alamgir Shaikh made a special mention of journalist Nabeel Hashmi for having played the pivotal role in making the award possible for the world champion.

Nadeem Omar, who has been more famous and active in the cricketing circles, having served as the Vice President of the Karachi City Cricket Association (KCCA) besides managing the Omar Associates and the Omar Cricket Club, paid glowing tribute to Asif for earning glory for the country.

“There was a time when Pakistan held four world titles simultaneously. But right now we only have one title which has been made possible by Asif. We should encourage our national heroes in order to let them perform even better at the international stage to earn more glories for the country,” he remarked.

“I became concerned to know about Asif’s plight in getting the rewards which were announced following his triumph in the World Snooker Championship. I also read in the newspapers of him being not able to pursue his professional goals due to financial constraints. This is our token contribution to the national cause,” Nadeem Omar stated.

“I do hope that Asif will fulfill his dream of transforming into a professional from being an amateur. He has tremendous potential. He is young and energetic. I am confident that he will continue earning glories for himself and the country. Let’s continue extending him the desired support,” he added.

Asif, in his brief speech, acknowledged the national spirit of Nadeem Omar and expressed the hope that others will derive inspiration from him for the sake of sports. He also thanked the PBSA for facilitating him. He reiterated his desire to enter the professional snooker circuit.

“It’s my dream and I will fulfill it soon,” he declared. The luncheon ceremony, which began at 2.30 pm, was attended by the top officials of the Pakistan Billiards & Snooker Association (PBSA) which included its Senior Vice President, Abdul Wahid Qadir, and Honorary Secretary, Munawwar Hussain Shaikh.
readmore »»