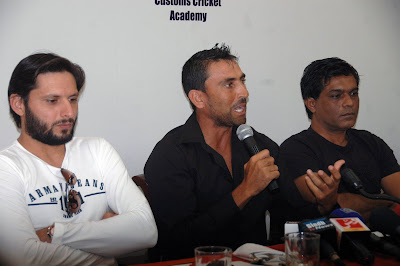 As many as four Pakistan cricket captains are proactively involved in supporting the cause of humanity by helping the Islamic Relief (IR) raise substantial funds for the under-privileged and displaced persons in the country.

The quartet of Rashid Latif, Moin Khan, Younis Khan and Shahid Afridi has been instrumental in generating funds for the IR to let them carry out their mission with renewed enthusiasm.

Three of them were in attendance in the IR’s launch of Malakand Rehabilitation Programme held at the Karachi Gymkhana on October 26. Moin Khan was unable to make it because he had to air-dash to Lahore to attend the funeral of Wasim Akram’s wife, Huma, who passed away on October 25.

Fateha was offered for the departed soul before the start of the proceedings and every speaker expressed condolences to Wasim Akram on the untimely death of his wife.

Haris Ahmed Khan, the former Pakistan Customs off-spinner turned qualified coach, has played the pivotal role in roping in the celebrated cricketers to join hands with the IR and take their noble mission forward.

Haris, in his brief speech, recalled that it didn’t take long for him to convince Rashid Latif and Moin Khan who readily agreed to be a part of the fund-raiser in the United Sates (US).

“Then we took Younis Khan and Shahid Afridi to the northern areas of the country devastated by the earthquake in October 2005. They realized the gravity of the situation after reaching there and immediately volunteered their services for the IR,” Haris stated.

Rashid Latif, a former Pakistan captain, shared his experiences at the IR, saying he’s touched after watching the destruction of the various towns by the earthquake.

“It was really very painful to walk on those rocky surfaces where hundreds of people had been buried alive just a few days ago. We took the responsibility of playing our part in helping the people in need,” Rashid remarked.

Pakistan’s Twenty20 captain, Shahid Afridi, announced that he believed in looking at life beyond cricket and it was the reason of him coming on board at the IR.

“When I visited the floods-affected areas of Balochistan I was dismayed at the sufferings of the people who were struggling for basic amenities. Even more depressing was the inaction of the government. Thankfully the IR was there and I made up my mind to contribute my bit in letting them accomplish their cherished goals,” the flamboyant all-rounder asserted. 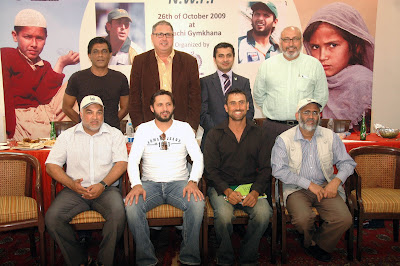 Pakistan’s captain for Tests and One-day Internationals, Younis Khan, believed that they had to undertake the responsibility of serving the humanity, particularly those who are less fortunate, having been hit by disasters.

“As a human being it’s our duty to care for others. The IR has been doing a great job and I consider a privilege to be a part of their team. It has been hectic at times but we take pride in playing our part by participating in the fund-raisers,” Younis added.

Jalaluddin, a former Test fast bowler, has also been a motivating force in facilitating the Islamic Relief who had commenced operations in Pakistan in 1992 after having secured registration with the Security & Exchange Commission of Pakistan (SECP) as a company limited by guarantee (Local NGO). It is also registered with the Economic Affairs Division, Ministry of Finance, Government of Pakistan.