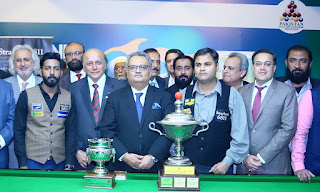 Although the top officials of the sports division of National Bank of Pakistan (NBP) were unable to respond to the queries concerning their high-profile consultant, Wasim Akram, a former Pakistan cricket captain, they came to the rescue of the Pakistan Billiards & Snooker Association (PBSA) by sponsoring the latest edition of the Nationals which was organized at the NBP Sports Complex in Karachi from December 28 to January 3.
In the question-answer session during its media briefing held at the Karachi Club Annexe on December 24, the NBP functionaries had politely regretted the query regarding Wasim Akram who has been associated with the bank’s sports division as consultant for the last few years with his terms and conditions or job description having been kept as ‘secrets’ by their management.
The financial support to the tune of Rupees four million provided by the bank, however, to the cash-starved PBSA enabled the cue sports body to revive their domestic events and the NBP 47th National Snooker Championship 2023 was held successfully. 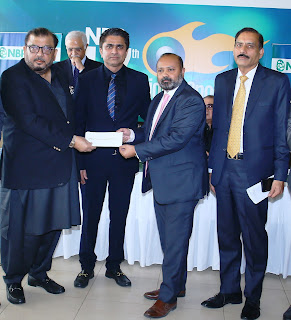 The duo of Arif Taherbhoy and Naved Kapadia once more met the challenge of managing the event at skillfully and diligently. They were duly recognized for their organizational efforts.
Mudassir Inamullah Khan, SVP/Divisional Head, NBP, and Kamran Khalid, SVP/Wing Head NBP, had done the honours on behalf of the bank by presenting the sponsorship cheque of Rupees four million to Jawed Karim, President, PBSA, at the end of the media briefing. Ali Asghar Valika, Patron-in-Chief of PBSA, alongwith other office-bearers of the association were also present on the occasion.
Meanwhile Rehmat Ali Hasnie, President, NBP, was the chief guest in the prsentation ceremony in which a record prizemoney of Rs 525,000 was disbursed among the top performers. He presented a handsome purse of Rs two lacs to Sultan Muhammad with the winner’s trophy while runner-up Shan Naimat was awarded Rs one lac. Shahid Aftab collected a cash award of Rs 25,000 for registering the highest break (141) of the championship.
Alamgir Anwar Shaikh, Chairman, PBSA, in his welcome address, acknowledged the support of all the stakeholders in promoting cue sports despite the crunch situation. The top officials of the PBSA as well as the NBP sports division were in attendance during the prize distribution ceremony. 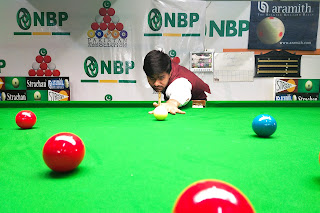 The one-week event witnessed plethora of upsets leading to the elimination of all eight seeded cueists before the title clash in which unseeded Sultan Muhammad, belonging to Sindh, emerged triumphant over Shah Naimat, a qualifier from Islamabad, in the final.
With the fancied cueists have exited earlier, a new national champion was set to be crowned on January 3 as both the combatants were making their maiden appearance in the final of the National Snooker Championship.
It turned out to be a fiercely fought duel and the 40-year old Sultan Muhammad won it 7-5 with the frame scores of 69-58, 16-105, 86-24, 4-85, 21-72, 32-70, 69-30, 61-39, 56-21, 62-41, 53-66, 69-0.
Unsurprisingly both the finalists were engaged in safety first approach for the most part of an encounter lasting nearly seven and a half hours. The 28-year-old Shan Naimat broke the shackles occasionally with a break of 95 in the second frame and then chalking up another classy break of 85 a couple of frames later.

Very good coverage of the event. Congratulations! to Sultan Muhammad, the winner.