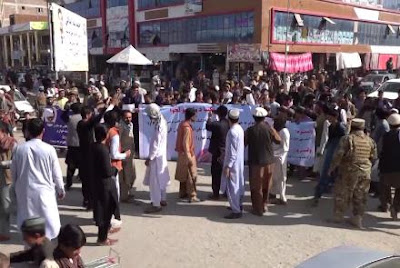 Youths and cricket fans came out on roads in Khost city, the capital of Khost province Afghanistan, demanding the timely holding of the Million Cup Cricket League in their area.
They also accused the Afghanistan Cricket Board (ACB) of trying to cancel the hosting of the league in Khost province, noting that the grand Paktia zone had legal rights to host the league.
The participants at the march also claimed that the ACB officials did not have the necessary ability and qualifications to deal with the cricket affairs in Afghanistan.
The ACB officials, meanwhile, have stated that the league will be held after completing its legal procedures.
The protestors urged the Afghanistan government to take action against what they described as the unprofessional dealing of the ACB officials with cricket in the country.
“The Million Cup Cricket League should be held in Khost. All arrangements have been made, the necessary guarantees have been given,” the protestors demanded.
According to reports, the Million Cup Cricket League, Chinar Media Consultancy Services Co. and Moby Group Afghanistan had signed an agreement earlier this month in Kabul formalizing the collaborative effort to hold the cricket league's fifth season competition and broadcast the matches.
The league, in coordination with the ACB will, for the first time, meet international standards and follow the board’s guidelines. The matches will be broadcast live on Lemar TV and Arakozia radio. The event is scheduled to start on October 30 at the stadium in Khost province and will continue until November 13.