Shaiza Khan spearheading the cause with conviction

Shaiza Khan happens to be one of the trend-setters. She has been chiefly responsible for putting Pakistan women on the cricketing map of the world. Besides being an active cricketer herself she has excelled in the role of the administration of the game against the heaviest of odds.

She currently holds a world record having merited recognition in Wisden, the Bible of cricket. She rewrote history by capturing 13 wickets in a Test match, obliterating Australian Betty Wilson’s record of 11 wickets achieved way back in 1956. Her record haul also included a hat-trick, only the second in women's Test history.

Shaiza also earned the distinction leading Pakistan women's cricket team in their first-ever Test match as well as the inaugural One-day International. She has, in fact, led the country in 40 ODIs besides three Tests. The prolific leg-spinner captained the national team in the 1997 World Cup in India and the 2003 IWCC Trophy in Holland.

She had started playing cricket at a very young age and the passion grew while attaining secondary education in England. She played club cricket for Winchmore Hill in England while she graduated to league and county cricket just a few years later. She was still at school while making her debut for Middlesex in 1986.

She became the first non-British captain for University of Leeds, where she completed her masters in Textile Engineering during 1991-95.

Upon her return to Pakistan she proactively took up the challenge of organizing a proper women team that could make its presence felt on the international scene. She had the dual responsibility of looking after the administrative matters besides leading the team in the field.

Shaiza was the motivating force behind the launch of the Pakistan Women Cricket Control Association (PWCCA) a body that was founded in January 1996 and registered under the Companies Ordinance of 1984. Later the same year the PWCCA became affiliated to the International Women's Cricket Council (IWCC) as an associate member.

Shaiza led Pakistan in their first-ever ODI in New Zealand soon after the country was granted the desired status. She added another feather to her cap by captaining the team in their historic first-ever Test match played against Sri Lanka in April 1998 at Colombo.

In 1999 she had become the first overseas player/member of the Marylebone Cricket Club (MCC) when the membership opened for women after 212 years. She is currently a full member of the MCC. 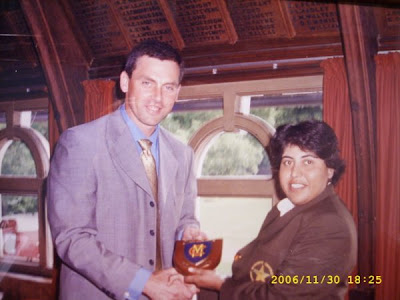 Although her focus of late has shifted on the administration of the PWCA, she remains an active cricketer and makes most of her stay in England during the summers.

Shaiza is a versatile entrepreneur working as Executive Director in the United Carpets Group of Industries. She has been one of the major financiers in the promotion and development of women’s cricket in Pakistan.

In fact it’s believed that the affairs of women’s cricket were totally financed by both Shaiza Khan and Sharmeen Khan during the first 10 years of PWCCA’s existence.

I must applaud and salute this lady for her undettered struggle and the fact that she has not given up and is still fighting the BIG FISHES of PCB against all odds is a great feat on its own. I think Shaiza Khan should be given sitara-e-jurrat for standing up for her rights in a country and setup where ONLY might is considered right.

We need people like shaiza heading our organisations, who selflessly not only devote themselves but also devote their resourses - just to make Pakistan proud!!

When Quaid-e-Azam founded Pakistan he was supported by such selfless individuals and made such a great dream - REALITY.

Such people are still living amongst us - they might be few as compared to before - but the delima is that our society sidelines individuals like Shaiza Khan first!!

I salute you Shaiza Khan as the first Captain of Pakistan women's cricket Team. The whole nation is praying for your success. Amen