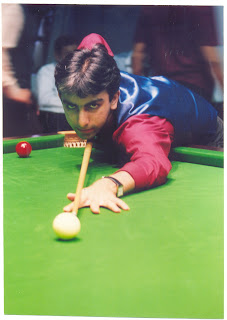 While the International Billiards & Snooker Association (IBSF) has notified a strict dress code for the upcoming 2008 World Snooker Championships but they seem to have a missed a trick or two while compiling the draws of the men’s event.

The officials of the Pakistan Billiards & Snooker Association (PBSA) were perplexed at receiving a copy of the draws in which the participating 104 cueists from 52 countries have been divided equally in 13 groups in World Men Snooker Championship being staged in Wels, Austria, from October 27 to November 5.

“In the draws having reached us there are 13 groups having eight cueists each. We won’t get a figure divisible by eight if equal number of cueists are to progress to the next round from each group,” he wondered.

“Another confusion in the draws, not having any footnotes, is the title of groups. We have 13 groups starting from A to N with the exception of I. We are not sure how have these lapses occurred in the compilation of the draws of such an important tournament on the IBSF calendar,” he added.

The PBSA, meanwhile, has approached the IBSF to seek clarification on the draws of the World Championship in which Pakistan will be represented by the country’s top two cueists, Saleh Mohammad and Khurram Hussain Agha.

Interesting the IBSF has issued a strong directive to the participating countries as far as the dress code for the World Championship is concerned.
“Please advise your players that the dress code will be strictly adhered to. All players must wear a waistcoat whilst playing. This includes lady players. Lady players must wear a blouse that is worn in or over the pants. No short shirts or blouses are accepted,” the IBSF handout said.

“Evening dress or dark-suit together with waist-coat shall be worn in all sessions of the matches. Long-sleeve shirts buttoned at the wrist, waistcoats and bow-ties, shall be worn for all matches, save when the venue conditions are hot and humid, and, in which case, certain relaxation to dress-code requirements may be decided thereupon by the Championship Committee.”

The IBSF has warned that the failure to comply with the prescribed dress code may result in the forfeiture of the match by the players in default.