Fahad Academy annexed the Omar Trophy Inter-School Cricket Tournament 2016, being organized by the Pakistan Veterans Cricket Association (PVCA), by overpowering Qadri Public School by four wickets in the final at the National Stadium Karachi on November 13. 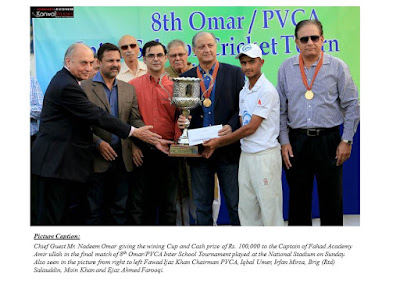 Fahad Academy, who had gone down fighting against Beaconhouse School System in the final of the previous edition of the tournament at the same venue a couple of years ago, made amends by prevailing over their opponents while chasing a target of 222 with nearly six overs to spare with their all-rounder Rahman Ghani clinching Man of the Match award.

Fahad Academy’s spin trio of Bilal Agha (2-23), Rahman Ghani (2-28) and Mohammad Umair (2-35) brought their side back in the game with their fine spells which didn’t allow the total to get into mammoth proportions.

Having successfully chased down the target of 317 in the semifinal, Fahad Academy looked the favourites to clinch the issue when they began their innings needing 222 off 40 overs.

Their semifinal hero, Mohammad Rehan, who cracked an incredible unbeaten double century, didn’t last long this time, however, perishing after scoring a whirlwind 19 off eight balls.

The responsibility was taken over by the Fahad Academy skipper Mahmood Shah, who remained undefeated on 76 off 100 balls to take his time home with four wickets in hand. He shared 144-run third wicket stand with Rahman Ghani, who made 66 off 70 balls.

Qadri Public School brought about a collapse in the closing stages by capturing four quick wickets but it was too late to change the course of the match.

Nadeem Omar, Managing, Director, Omar Associates (Pvt) Ltd, who was the chief guest in the prize distribution ceremony, presented the winners’ trophy alongwith a purse of Rs 100,000 to the Fahad Academy skipper Mahmood Shah while the runner-up trophy, alongwith a sum of Rs 50,000, was collected by Abdul Basit, the captain of Qadri Public School.