Sania Mirza foresees no problems in playing in Pakistan 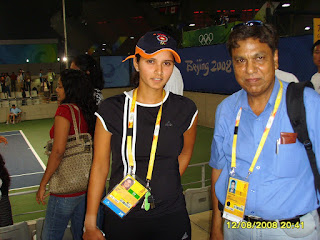 By Syed Khalid Mahmood
The tennis star Sania Mirza has recently rewritten history by becoming the first Indian woman to annex a Grand Slam title. Partnered with Mahesh Bhupathi, she won the mixed doubles event of the Australian Open 2003 by overpowering the duo of Nathalie Dechy and Andy Ram 6-3, 6-1 in the final in Melbourne.
Indeed winning the Australian Open mixed doubles title with Mahesh Bhupathi was the best way she could have made a comeback in the international circuit after having been out of action for quite a while due to a wrist injury.
"It is very special to win your first Grand Slam. After the injury it is a great way to come back. I am just living in the moment for now," the 22-year-old Sania Mirza was quoted as saying upon her return to India.
Sania Mirza, laid low by the wrist injury for the better part of the last year, has begun the new year on a high note and she looks determined to make it count. What a great start she has had to 2009, winning her maiden Grand Slam title in the very first outing.
Last year the wrist injury had forced her to withdraw from several matches and the Roland Garros and US Open Grand Slams.
She represented India at the 2008 Olympics in Beijing, in the women's singles and doubles events. In singles, she retired in the round of 64, while she was trailing 1-6, 1-2 against Iveta Benešová of Czech Republic. She teamed up with Sunitha Rao for the doubles event. They got a walk-over in the round of 32, but lost to Russia's Svetlana Kuznetsova and Dinara Safina by 4-6, 4-6, in the round of 16.
Talking to a group of covering journalists from Pakistan, she had remarked during the Beijing Olympics that she would like to play in Pakistan where she has also great fan following. She didn’t foresee any problem if invited to participate in any tennis event in Pakistan. She spoke very highly of the talents of Aisam-ul-Haq, Pakistan’s premier tennis player of the recent times.
Hailing from the historic town of Hyderabad, Sania Mirza had started playing tennis at the age of six, turning professional at the age of 16. She made her debut in the India Fed Cup team, winning all three singles matches. She won the 2003 Wimbledon Championships Girls' Doubles title, in the company of Alisa Kleybanova of Russia. 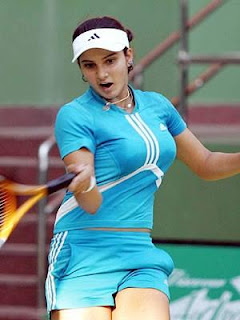 She is the highest ranked female tennis player ever from India, with a career high ranking of 27 in singles and 18 in doubles. She holds the distinction of being the first Indian woman to be seeded in a Grand Slam tennis tournament.
She had become the first Indian woman to reach the fourth round of a Grand Slam tournament at the 2005 U.S. Open, defeating Mashona Washington, Maria Elena Camerin and Marion Bartoli. In 2004, she had finished runner-up at the Asian Tennis Championship.
In 2005, Sania Mirza reached the third round of the Australian Open, losing to eventual champion Serena Williams. She became the first Indian woman to win a WTA singles title, defeating Alyona Bondarenko of Ukraine in the Hyderabad Open Finals.
She won the silver in the women's singles category and the gold in the mixed doubles partnering Leander Paes in the 2006 Asian Games at Doha.