The 13th edition of Sindh Games, promoting the theme of tolerance and carrying the slogan ‘sports spread happiness’ was inaugurated in a colourful ceremony at the PSB Coaching Centre in Karachi on June 14. 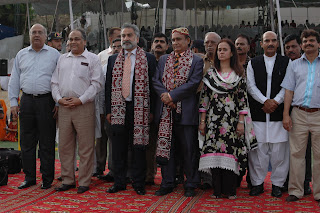 Sindh Home Minister, Zulfiqar Mirza, declared the Games open on a pleasant and overcast evening in the presence of Sindh Sports Minister, Dr.Muhammad Ali Shah, who is also the President of the Sindh Olympic Association (SOA), and Shoaib Ahmed Siddiqui, Secretary Sports & Youth Affairs to the Government of Sindh.

South Asia’s fastest woman, Nasim Hameed, having made the country proud earlier this year, had the honour of lighting the torch of the Sindh Games being held in her hometown, Karachi, for only the third time in 24 years. Veteran athletes Mohammad Talib and Syed Zahid Ali Rizvi also ran with the torch.

The record number of participating male and female athletes and officials, estimated to be over two thousand, attired in different coloured tracksuits participated in the march past. The promising local sprinter Almas Ibrahim, who clinched as many as eight gold medals in the last Sindh Games in Larkana, took the oath on behalf of the athletes.

Karachi Heroes, Hyderabad Champions, Larkano Tigers, Sukker Riders and Mirpurkhas Superstars are the five regions, comprising of all 21 districts of the province, participating in the three-day extravaganza.

The male athletes are in action in 36 disciplines while the women folks are trying their luck in 17 disciplines. As many as 15 venues across the city are being used to stage the Games with the majority of the events being organized at the PSB Coaching Centre, NED University, Karachi University, Sindh Sports Complex Nazimabad and City Sports Complex, Kashmir Road.

The outstation participants, to be paid Rs.250 as the daily allowance for five days, have been provided accommodation in the various hotels besides the hostel of the Karachi University. Originally it had been planned to lodge all the athletes in different educational institutions but there was a last minute move to make arrangements at hotels. 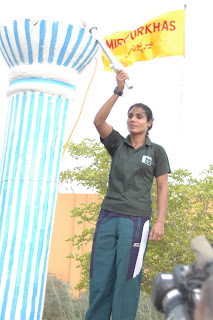 Due to a combination of factors not all the athletes could be provided the track suits before the start of the Games but the organizers didn’t deem it proper to delay any of the events allowing the participants to compete in any other sporting dress.

All the contingent heads, however, were considerate and they expressed satisfaction with the overall arrangements made for the Games and they complimented the provincial government for having met the challenge against the heaviest of odds.