“I have a feeling that the Indo-Pak Test series could be planned on the pattern of ‘The Ashes’ series between Australia and England. There should be a bilateral series after two years. I am sure there would be even greater buzz around the world if Pakistan and India start playing each other regularly for a trophy.” 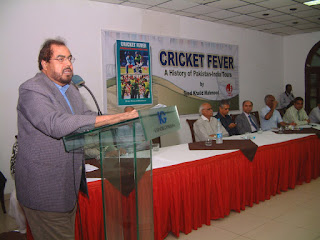 Dr Mirza Abrar Baig, Senior Executive Vice President & Group Head, National Bank of Pakistan, made these observations while speaking in the launching ceremony of ‘Cricket Fever’ held at the Karachi Gymkhana on July 17.

Dr Abrar Baig, who presided over the book launch function, went on to add that since Pakistan had last toured India in 2007-08, now the Indians should be persuaded to visit Pakistan in 2009-10 and Pakistan should go there again in 2011-12.

Although he’s a banker by profession, he has great passion for sports in general and cricket in particular.

He delivered a thought provoking speech on the occasion in which his deep insight for cricket was very clearly reflected.

“Cricket, in fact all other sports, have come alive with the recent triumph of our team in England where they emerged triumphant in the ICC Twenty20 World Cup. I am sure the odd defeats in the subsequent Test series in Sri Lanka is not going to dampen the spirits and our boys would be back to the winning ways in the very near future,” Dr Abrar Baig remarked.

“National Bank is proud to be associated with sports and we take pride in promoting the healthy activities in the society as a responsible corporate citizen. We are delighted to have produced the sporting heroes having made the nation proud,” he added.

“Coming to the subject of the book, the sporting contests between Pakistan and India have had a history of fierce rivalry. With cricket being the number one sport in both the countries, every series between them is considered something very special. Unfortunately there have been deadlocks for non-cricketing reasons more than once and we have been denied the pleasure of regular cricket between the two neighbours,” he pointed out.

“The book in your hands ‘Cricket Fever’ has recaptured the excitement and glories of all the series played between them during the last 57 years. All the16 bilateral tours have been comprehensively covered and it’s quite an accomplishment on part of the author to have penned as many as 10 books,” Dr Abrar Baig complimented. 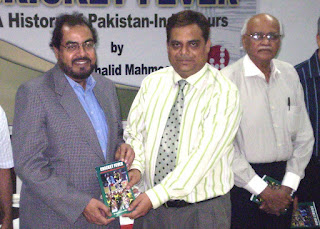 “On personal front the memories of the Indo-Pak matches always remain fresh in my mind. How can one never forget the tension, the joy and the pains that have come with the package,” he said.

“The large number of cricket enthusiasts in both the countries look forward to the cricket matches between Pakistan and India. I believe that there should be a regular series between these two nations that would have greater global following than any other cricket event,” he reckoned.

Pakistan’s Federal Sports Minister, Pir Syed Aftab Hussain Shah Jilani, has hinted at the early resumption of cricket ties with India, announcing that the nation would soon hear the ‘good news’ in this regard. 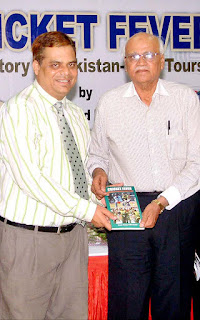 “The recent meeting between the Prime Ministers of Pakistan and India could break the deadlock and I am quite optimistic that we would have the revival of cricket series very soon,” he told reporters after launching a book on Indo-Pak cricket titled “Cricket Fever” at the Karachi Gymkhana on July 17.

“Let me assure you that the government of Pakistan is very eager for the resumption of sporting ties but our Indian counterparts have yet not reciprocated in the same manner,” he pointed out.

“Cricket is the most popular game in both the countries and to be it doesn’t make any sense to deny the peoples of watching the two most exciting teams in the cricketing world in action on their own soil. It’s indeed a pity that the Indo-Pak cricket series have been deadlocked in the past as well,” the Federal Minister regretted.

“It is, however, very heartening to note that contacts are being revived in other games and we are hoping cricket’s turn will come sooner than later,” he believed.

“The Federal Ministry of Sports and the Pakistan Sports Board (PSB) have recently allowed a few sporting outfits to travel to India on case to case basis. We hope that our initiatives will be welcomed and the Indian sports authorities will reciprocate with the same spirit of goodwill,” Pir Aftab Jilani hoped.

“Sometimes we are baffled by the cold response from our Indian counterparts because we understand that the sporting contacts could be very helpful in improving the relations between the two neighbouring countries,” he thought. 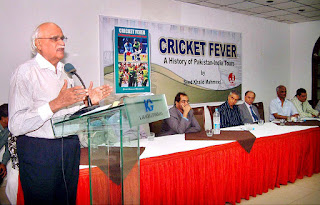 Sharing his views on the Indo-Pak cricket matches of the part, Pir Aftab Jilani said he has always been thrilled by watching these games.

A former cricketer himself, he lauded the contribution of sports writers and journalists in preserving the history.

“Sports writers have made the country proud by producing informative and historic books which reminds us of our glorious past in sporting arena. Cricket Fever authored by Syed Khalid Mahmood is a welcome addition to the quality sports brought out from the country,” the Federal Minister said.

“The performances of our athletes may have suffered over the years but our authors are doing a service to the nation by recalling their accomplishments of the past,” he commented. 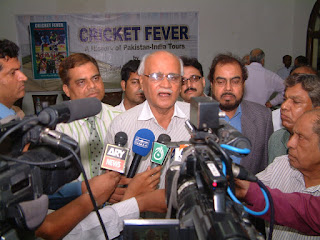 “Cricket Fever takes me back to those golden years when Pakistan’s cricketers performed exceptionally well to conjure up victories against the heaviest of odds. Pakistan’s performance in the formative years had exceeded expectations as they downed every team they came across in their first-ever series, India included,” the Federal Minister recalled.

“Some of Pakistan’s greatest conquests in cricket have come against India. The innings victory at Lucknow in 1954-55, in only their second Test. Then the series win in 1978-79 when the Indo-Pak cricket resumed after 18 years. Pakistan’s first-ever series win in India in 1986-87 is also fresh in my minds,” he concluded.