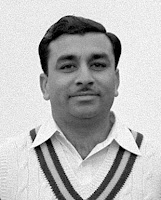 Tributes were paid to former Test off-spinner Zulfiqar Ahmed, who passed away earlier this month, in a condolence meeting organized by the Brotherhood Sports Society of Pakistan (BSSP) at the Karachi Gymkhana on October 12.

Mr Waqar Hasan, a former Test batsman and President BSSP, recalled that Zulfiqar Ahmed had played all his nine Tests in which he was also playing for the national team under the captaincy of Abdul Hafeez Kardar between 1952 and 1956.

‘Little Master’ Hanif Mohammad, another illustrious contemporary of his, described Zulfiqar as a very skilful spin bowler who possessed the variety to test the finest of batsmen.

The other speakers that included Messrs Razaullah Khan, Munir Hussain, Siraj-ul-Islam Bokhari, Zahid Bashir and Qamar Ahmed, recalled that Zulfiqar was a very lively character on and off the field who took pride in keeping his teammates and friends entertained with his sense of humour.

A large number of cricketers, administrators and organizers attended the condolence meeting.

Zulfiqar made his Test debut against India in the second match of the 1952-53 series at Lucknow. His inclusion in the playing eleven turned out to be a good omen as Pakistan defeated India by an innings and 43 runs to register first ever win in Test cricket.

Zulfiqar could not achieve much success with the ball against the Indians, known for handling the spinners well, but as a tail end batsman he scored unbeaten 63 at Madras adding 104 in just 85 minutes with Amir Elahi for the last wicket that stood as world record for many years.

The story was not much different on the tour of England in 1954 either. He had limited success with the ball in conditions more suited to the swing bowlers but he made a handy contribution with the bat once more.

Zulfiqar's aggregate of 50 runs was more than the first four batsmen, Hanif Muhammad, Alimuddin, Waqar Hasan and Maqsood Ahmed in the fourth and final Test at the Oval which Pakistan won against the heaviest of odds to level the series.

His off-spinning talents were unfolded in the home series against New Zealand in 1955-56. In the first Test at Karachi, he baffled the Kiwis with the figures 11 for 79 to earn the first-ever Test win at home for Pakistan.

He played nine Test matches for Pakistan in which he took 20 wickets and scored 200 runs. He also held five catches.

Hello Khalid, i really like your blog, and i would want you to continue with the good work that you are doing here. That will be all for now and looking forward to more.