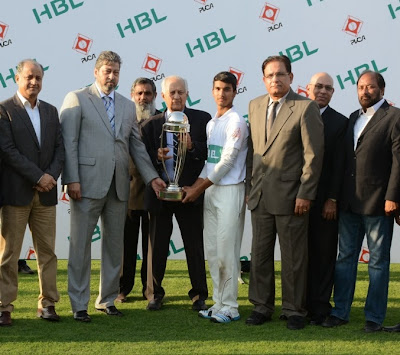 Besides smashing 134 off only 79 balls, he also claimed three wickets to ensure that Beaconhouse School North Nazimabad clinched the trophy rather leisurely in the end. With the final and the prize distribution ceremony the curtain fell to the organized by the Pakistan Veterans Cricket Association (PVCA) and sponsored by HBL.

Set a target of 196 in 40 overs, Beaconhouse School North Nazimabad lost both the openers cheaply but guided them to the chase, with a sensational knock of 134 which contained five sixes and 18 fours.

Beaconhouse School North Nazimabad was in sight of massive victory when he departed and the job was completed by the pair of Anwar Iqbal (26 off 20 balls) and Izaan Waqar (18 off 36 balls), both of them remaining undefeated, as the winning runs came in only the 27th over.

The spinners did a terrific job by picking up wickets at regular intervals which choked the rate of scoring and restricted Fahad Academy to a total of below 200.

The prize distribution ceremony was held soon after the conclusion of the final in which the chief guest, Aman Aziz Siddiqui, Head-Strategy & Investment, HBL, presented the winners trophy with a cheque of Rs 50,000 to the Beaconhouse School North Nazimabad captain, Hassan Khan, while Tauseef Khan, the Fahad Academy skipper, collected a cheque of Rs 30,000 with the runner-up trophy.

In the individual awards category Tariq Bakht was declared the Player of the Tournament while, Ammad Alam, Mohiuddin Javed, Mohammad Moiz and Ammar Iqbal were declared as the best batsmen, the best bowler, the best fielder and the best wicketkeeper of the tournament respectively.

In his brief address on the occasion, Aman Aziz Siddiqui announced that HBL will like to make the tournament a permanent annual event in future.

Fawad Ijaz Khan, Chairman, PVCA, in his welcome address, made the announcement that the Inter-Schools Cricket Tournament will now be extended to the other cities of the country too.

Shaharyar M. Khan, Chairman, Pakistan Cricket Board (PCB), who was the guest of honour, assured the Board’s total support to the PVCA initiatives aimed at promoting the game from the grassroots level.