HBL Schoolboys Greens and Karachi Public School overwhelmed their respective rivals in the league matches of the HBL Inter-School Cricket Tournament 2014, being organized by the Pakistan Veterans Cricket Association (PVCA). 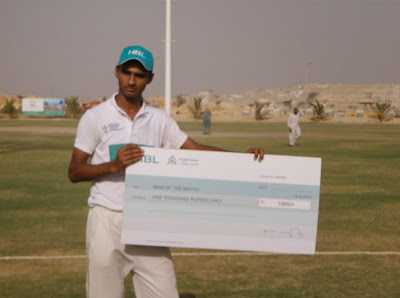 Put into bat, HBL Schoolboys Greens posted the highest score of the tournament. They became the first team, after 26 matches, to cross the magical figure of 300. They finished with an outstanding score of 347 for six in the allotted 40 overs.

They went from strength to strength after the flying start provided by openers Syed Ameen (52 off 54 balls) and Mohammad Usman (33 off 35 balls). Number three Aurangzeb Ahmed played the most enterprising knock of the day as he smashed 10 boundaries in his 92 off 71 balls. He was adjudged Man of the Match.

Tausiq Ahmed’s unbeaten 48 off 23 balls took the score into astronomical proportions while Aamir Malik (25 off 31 balls) and Nadir Awan (32 off 19) also contributed their bit. The total could have been even taller without the effort of medium-pacer Maaz Ahmed (3-44).

City School North Nazimabad collapsed to 75 all out in 24.4 overs while chasing a huge target of 348 in 40 overs. The HBL Schoolboys Greens spin trio of Syed Ameen (3-5), Nadir Awan (2-8) and Zohaib Masood (2-13) bowled tightly and effectively which didn’t allow any batsman to settle down. 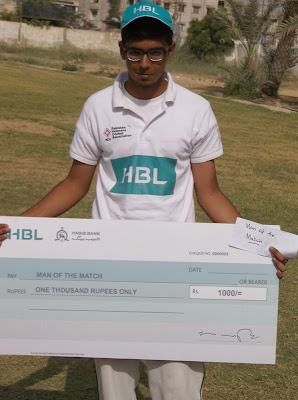 Karachi Public School’s medium-pacer Abdur Rafay returned the exceptional figures of five for 26 to send Rangers Public School crashing to 152 all out in 37.5 overs despite Saad Ansari’s 66 off 89 balls.

Medium-pacer Furqan Siddiqi (2-34) and leg-spinner Ali Tirmizi (2-39) also chipped in with useful wickets to sustain the pressure as Rangers Public School could not play out its quota of 40 overs.

The 106-run unbroken second wicket stand between opener Ali Tirmizi (40 off 80 balls) and Sameer Shaikh (67 off 85 balls) enabled Karachi Public School to reach the target of 153 in 30.5 overs with nine wickets in hand.

The Man of the Match award was given to Abdur Rafay for his five-wicket haul which helped his team in bowling the opponents out for a below-par total on a good batting surface.