The Pakistan Customs has decided to celebrate 2015 as the tribute year to Jalaluddin, a former Test bowler, in recognition of his services as a player, a coach and as an administrator. 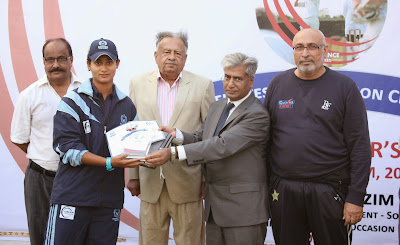 The announcement was made by Nazim Saleem, Chief Collector Customs, (Enforcement South), during his speech in the certificate distribution ceremony of the Pace Bowler’s Training Camp, organized by the Customs Cricket Academy (CCA) which took place on the evening of September 13.

The Chief Collector, undertaking his maiden visit to the CCA, housed in Federal-B-Area, thoroughly appreciated the efforts of his predecessors for having supported the cause of the game by developing a state-of-the-art cricket academy.

Nazim Saleem paid glowing tribute to the deceased CCA coach, Shabbir Hussain, besides recognizing the administrators and the coaches of the academy. He lavished Jalaluddin with praise for his single-mindedness and consistency of purpose.

“It’s quite extraordinary how he has worked for the development of the players in the country. Let us acknowledge the efforts of Head Coach Jalaluddin for having established the CCA as the leading academy of the country. We think it’s the right time to honour Jalaluddin on his meritorious services for cricket and players development. We will hold quite a few events to pay tribute to Jalaluddin such as T-20 Cricket Match, grand gala dinner and a seminar on coaching during the coming year (2015),” the Chief Collector stated. 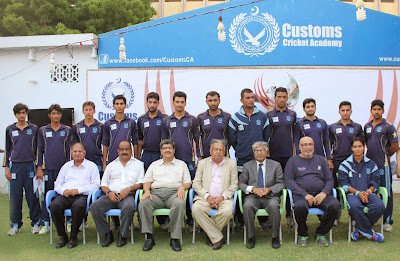 He advised the management of the CCA to install a sculpture of Khalil Masood, a former collector and the founder of the academy, at the entrance to the ground in recognition of his marvellous deeds.

Jalaluddin, in his speech, highlighted the salient features of the Pace Bowler’s Training Programme, which was organized to give an opportunity to the young and upcoming pace bowlers having talent and desiring to develop themselves as quality bowlers. He described pace bowling as a combination of talent, science and art.

“The programme, sponsored by Omar Associates, has proved that there is no dearth of pace bowlers in Karachi. Ther event has been successful one as few of them performed well at the district level and were selected for first time for region,” the former Test fast bowler remarked.

“Maham Tariq, the only girl who was selected for the camp, showed great improvement during the training programme and she was rewarded for his great effort by picking her for Pakistan’s women cricket team for the tour of Australia. She only had participated at district level before coming here,” Jalaluddin, who performed the first hat-trick in One-day Internationals, added.

Meanwhile Basit Ali was declared the best bowler of the camp, Nawaz Khan was adjudged as the best learner, Abdullah Aziz was decorated as the best young bowler and Maham Tariq was recognized as the find of the camp.