The pair of Raza Naqvi and Anwar Kamal wrote their name into record books by winning the first-ever bridge gold in the Sindh Games at the Aslam Bridge Hall, housed in National Stadium, Karachi. 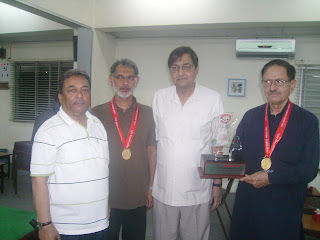 The inclusion of bridge in the 13th Sindh Games generated tremendous interest and a record number of 34 pairs entered the competition. It was the largest number of competing pairs in any of the contest in Karachi. 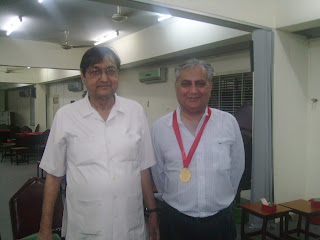 Masud Mazhar, by aggregating 67.01%, earned the honour of securing the gold medal in the individual championship with Ghulam Mohammad (65.31%) running away with the silver medal and Dr Ahmed Hasan (62.93%) clinching the bronze medal.

A total of 32 bridge players, featuring the top 16 of the pairs championship, took part in the individual contest that included the big guns like World Master Jan-e-Alam Fazli.

A couple of players from Larkana were expected to feature in the individual championship but they could not participate as they had arrived at the venue when the third round was being played.

Bridge was included in the Sindh Games for the first time in 24 years and not surprisingly it brought more glories for Karachi who won the trophy for the 13th time in succession.

Karachi dominated the Sindh Games in general but it was a totally one-way traffic as far as bridge was concerned with all three medals in both the bridge competitions being grabbed by the local players.

The total dominance of Karachi in bridge was not unexpected in view of limited avenues available in other towns or regions of the province. Hyderabad has had its presence but the same could not be said about Larkana, Mirpurkhas and Sukkur.

The inclusion of bridge in the Sindh Games opens the doors for the Pakistan Bridge Federation (PBF) as well as the Mind Sports Association of Pakistan (MSAP) as both the bodies are eager to spread the game.

The PBF don’t have a Sindh chapter yet but they could give it a thought now following the inclusion of bridge in the Sindh Games whose next edition is due to be held early next year.

The PBF may be constrained constitutionally and some amendments would need to be incorporated in order to facilitate a new provincial body which might be a time consuming effort considering the fact that they are governed by the Securities Exchange Commission of Pakistan (SECP).

In the interim period the PBF could mobilize their resources in organizing tournaments in the towns like Hyderabad, Sukkur, Nawabshah, Mirpurkhas and Larkana where bridge does have a certain amount of following.

Another option of accomplishing breakthrough could be extending the MSAP Collegiate Programme to other parts of Sindh after its successful launch in Karachi.

The Sindh Games has definitely provided an opportunity to the bridge administrators and the ball has now moved to their court. How swiftly they meet the challenge remains to be seen.